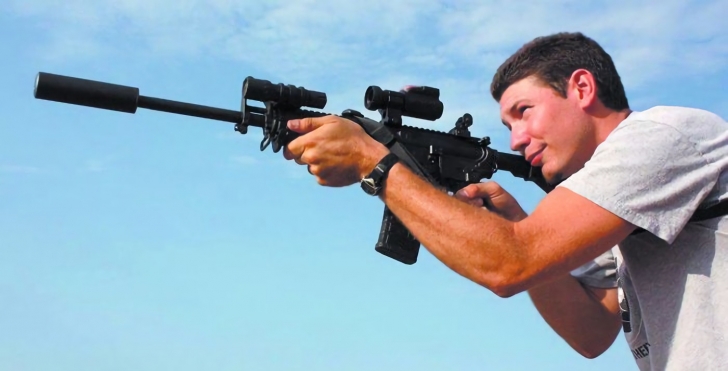 Interview: Dustin Ellermann of Top Shot on The History Channel

There are plenty of reality TV shows out right now; so many that I have my PVR working overtime. There are shows about storage auctions, cakes, cookies, hunting alligators, talent shows, real estate, driving trucks, and the list goes on and on. But one show that I recently started to watch really stands out when compared to the rest. The show is called Top Shot and is in its third season. If you like guns, you will absolutely love this show. You can catch new episodes every Tuesday night at 10/9c on the History Channel.

We had an opportunity to have a little chat with one of the contestants on the show, Dustin Ellermann. He wouldn’t tell us who won the title of Top Shot on Season 3, but he did answer other questions I threw his way.

Unfinished Man: So Dustin, why don’t you tell our readers a little about yourself and when you got into the recreational use of guns and hunting?

Dustin Ellermann:
I’m one of those guys that’s loved hunting ever since I was a little kid.  I remember almost every birthday from 6 years old included camo and guns.  I spent my summers shooting BB guns at my grandparents’ farm and figuring out things like scope offset and external ballistics.  Once I was a teenager, my dad finally let me take the 22s out and it became my #1 hobby.  Hunting followed simply because it had to do with guns.

Dustin Ellermann: I totally went into Top Shot just for the chance to have fun with some awesome guns.  So I liked all the firearms challenges and team competitions the most.  What was hardest to get used to was the down time.  It takes 3-4 days an episode and we are only shooting a few minutes each day. I’m a productive person and that was killer to be that lazy.  I’d get cabin fever and sometimes regret not going to elimination because I was so bored!

Unfinished Man: It seems that you have a pretty diverse background when it comes to shooting. How important is that in this competition?

Dustin Ellermann: Diversity and being able to adapt quickly are the best skills to go into Top Shot with.  The challenges are almost impossible to predict and practice for. Your best advantage will be to learn and perform on the go with your basic fundamentals intact.

UM: Give me a quick list of some of your favorite weapons that you have fired, whether they are rifles, handguns, or archery related.

Dustin: My favorites were the LaRue OBR and Volquartsen 22: both very accurate rifles and loaded with quality.

UM: I would be interested in knowing what is the furthest distance you have hit a target with a rifle using only the iron sight? And using a scope?

Dustin: I live in a forest – I don’t get the opportunity to shoot long range very often.  But I use my standard pistols with iron sights on 100 yard targets all the time. It’s fun to show off at that distance because most people think it’s impossible.  I was able to set up a 754 yard shot at a friend’s cow pasture about 2 years ago with my 308. That was a lot of fun.

UM: Mmmm, cows. So, I got a pellet gun for my 13th birthday and would use it occasionally in my backyard. I’m now 27 and I had an opportunity to fire a G3 rifle earlier this year. I had about 80% accuracy at hitting a target that was about the size of a piece of paper, which was 110 yards away using only the iron sights. Is that considered pretty decent for someone who never fired a rifle before? Don’t break my heart by answering no!

Dustin: That’s a great start with a battle rifle, and perfectly adequate too.  You’ll hear a lot of shooters use the term “pie plate” in talking about acceptable accuracy, so sounds like you are doing fine!

UM: Sweet, I’m officially battle ready. So, which types of guns can be found in your personal arsenal?

Dustin: Cool ones, joking.  I like all sorts of guns: “tacticool” type, semi auto, long range, mostly rifles and pistols.  Never been attracted to shotguns – I just have a few for duck hunting and such.  Some of my favorites are 22lr: cheap, accurate, quiet and fun!

UM: What is your favorite American rifle and foreign rifle?

Dustin: It totally depends on the application.  I’m partial to ARs, but totally liking the LaRue OBR or ones with historical character like a M1 Garand (somebody send me one of those!).  Foreign rifle?  Not too sure – most good ones are always American!

UM: Have you done a lot of competitive shooting in the past?

Dustin: Never. Top Shot was the first.  Never even spectated a comp.

UM: So you’re a minister, an accountant, a lumberjack, have kids of your own, and you’re also a foster parent. That’s close to Superman territory. When do you get time to shoot and keep your skills sharp?

Dustin: Ha, most of that was just to sell myself to the show, I hated talking about myself like that…  But yeah, I have to dabble in a little of everything to keep the camp running.  Guns are my #1 hobby. I might shoot once every 2 weeks or so, not near what competition shooters do.  It’s mostly for enjoyment for about an hour every so often.

UM: Do all the contestants get along pretty well once the cameras are not recording?

Dustin: Most everyone got along in the house. Even Jake had his civil moments when he wasn’t trying to stir up strife.  But if you think if you had 24 cameras running 24 hours a day in your home and they cut everything down to a few minutes, you might be able to make things look “interesting”.

UM: Besides shooting, what other hobbies interest you?

Dustin: I hunt a little, mainly because it’s another way to shoot, but besides that the camp keeps me very busy.

UM: I know ‘gun regulations’ are a big issue in the US. Do you think kids and young teens should be introduced to recreational shooting in a controlled environment?

Dustin: Absolutely!  I strongly believe that with proper training and responsibility it is a great skill to have.  In fact I have a Youth Marksmanship Camp in the works to host at my place early 2012.  Teaching kids to be responsible and to have good character can go a long way in our society.

UM: What are 3 of your most favorite meals?

Dustin: Guess I like Italian food and kid type food. I’d much rather have a good ol’ sloppy joe than a fancy 5 star “adult” meal.

UM: Which types of music can be found on your mp3 player?

Dustin: I’m a big podcast guy, so gun podcasts or cool sermons, then worship stuff by David Crowder, and I’ve always liked soundtracks from movies like Braveheart or Gladiator.

UM: What is your dream gun that you would like to own one day?

Dustin Ellermann: I would love to have something super long range like a high dollar 338, 408 or 50BMG, but that’s impractical where I live now and the budget I’d have to have for ammo.  So on the more practical note something like the LaRue OBR or Volquartsen 22 – something I can actually afford to feed.

UM: Any suggestions for Season 4 contestants?

Dustin Ellermann: Have your fundamentals of marksmanship in place and be able to adapt quickly.  Be an expert with ANY weapon or a rock or arrow bouncing off a ramp might be your demise!

Well there you have it folks. Hope this gives you a better idea of what Dustin is all about. Thanks for your time Dustin and good luck on the show. You can see Dustin and the other contestants in action every Tuesday on the History Channel at 10/9c. Trust me, it’s an awesome show!

Originally published on May 8, 2016 in Uncategorized