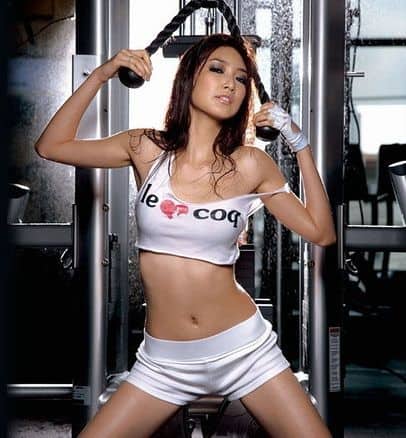 How To Approach Women In Everyday Life

How to approach that hot girl at the gym or at the market is the single most vexing obstacle that most men face.  It is the true test of your mettle and this article will help break down what’s getting in your way and help you focus on a new goal that will make you more confident and smooth in a jiffy.

Think about approaching a hottie as just like starting a new workout.  When you integrate a new exercise into your routine, it’s hard to do.  You struggle to keep your proper form and end up looking a bit awkward and unbalanced.  You’re extra tight and you’re probably starting with really light weights.  The more times you do it though, you find your form improving and you’re no longer feeling tested by those baby weights.  You are ready to bump up your poundage to get more out of it.  The same applies for approaching a woman (except I don’t recommend bumping up your poundage there).

The more practice and reps you get in, the better and more smooth your approach is going to be.  That’s why I highly recommend going up to EVERY hottie you see who lights you up.  No, not just the ones who look like easy targets, are in your “league”, or wreak of desperation.  EVERY HOTTIE.   The more repetitions you get the better.

The key to making this process work is forcing yourself to be less outcome oriented.

Don’t Be Tied To The Result – Enjoy The Process

Usually when we approach a hottie we have an objective in mind before we even think of what to say.  We’re wondering if she’s going to like us, if she’s going to be our next girlfriend, and/or if she’s going to sleep with us.  We’re getting way too far ahead of ourselves and working ourselves up into a mental tizzy which serves only to distract us from the moment.  Forget all of that because it’s only getting in your way and making you more nervous than you need to be.

Instead of focusing on the outcome, focus on the simple interaction.  All you are doing is striking up conversation with another human being (granted she’s one of God’s finer works of art…but still, human nonetheless).  Make it short and simple.  Make some witty banter.  Be challenging and never fawning.  The more relaxed and fun you are and most importantly the less you care how it goes (see not tied to the outcome) the more likely you will be to succeed.

When you take this approach it really doesn’t matter if she likes you or not.  You’re just having fun and flirting with an attractive woman in your worst case scenario.  If she’s not smart enough to be intrigued by your confidence then you can at least say you gave it a run instead of going home and kicking yourself later for doing bubkus.

Don’t Give Yourself An Excuse Not To

It’s so easy to see a hottie at the gym or at the market and allow yourself to just walk away and not say anything.  Don’t be that guy.

Think of it this way.  In other aspects of your life, do you just accept what’s handed to you and not go after what you truly want?  Do you interview for the job that’s the easiest to do and won’t push you too much or do you go after the position that’s going to challenge you and give you a benefit you don’t currently have (more money, more responsibility, more power…whatever gets you off)?  If you order a roast beef sandwich and the waitress bring you turkey, do you just accept it and eat it anyway or do you ask for what you want?  Take that same approach to dating and approaching women.

No one is going to hand you what you want in life.  Your dream woman is not just going to land in your lap (unless you’re in a strip club).  You’re going to have to do something to get her and that something is minimally just going up and talking to her.  Seriously, in the grand scheme of things is that really a big deal?

Don’t Mistake Her Being Stand-offish As Being Disinterested

The classic mistake that guys make is to assume that because a woman isn’t openly pulling you over with her golden lasso to come talk to her that she’s not interested.  Generally speaking women don’t show much as far as visual cues that they want to talk to you.  I can’t tell you the number of times I’ve been checking out the hottie at the gym who in my own mind has been avoiding my gaze.  I patiently wait for some “come hither” glance that never comes but I go in anyway. Those girls consistently end up being totally interested and giving me their number mere moments later.  Wonder what the big secret is?  Women are nervous too!

Yes, I know this is ground breaking information but in our minds we build them up as totally in control and with an agenda in tow about whether they’re inviting us over or not.  In fact, the opposite tends to be the case more often than not.  They are as nervous about talking to you as you are about talking to them (probably more).  She may not be waving you in like the ground crew at the airport, but she wants a quality man to approach her.

Put this to the test and witness how these girls who appear distant and even bitchy in their unemotional pre-conversation faces, turn to smiling and playful once you approach with something funny or challenging to say.  Try it out and comment back afterwards…I dare you.

It’s Not Easy At First, But What’s The Alternative?

Suck it up guys.  Part of being a man is that you have to make the first move.  The sooner you embrace that fact and stop getting in your own way, the sooner you’ll be connected with the woman you deserve.  If you take one part of this article away with you, I want you to stop being so focused on the result and get your reps in with women.  I guarantee you that this simple equation will prevail :

This is about who you are as a person.  Do you want to be the guy who goes for it in life and pursues that which will make him happy or the guy who’s content to just accept less because it’s easier?  Now get your ass out there and get her!