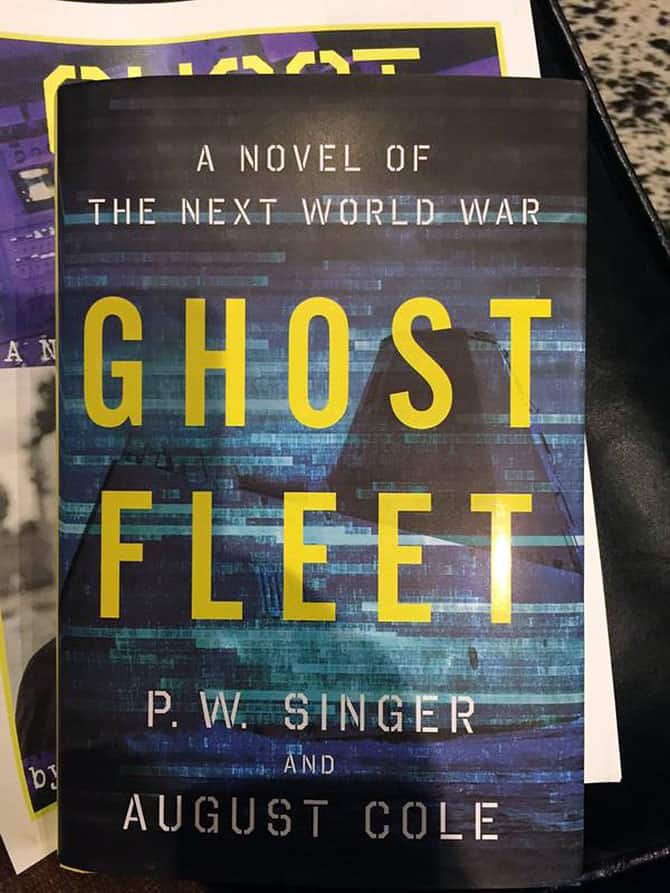 Ghost Fleet: A Novel of the Next World War

I generally like to come up with snappy titles for my book reviews, but this book’s actual title gets right to the point. Ghost Fleet is a novel about a fictional World War 3. The trouble… is that this fiction is all too plausible.

Written by P.W. Singer, a political scientist and specialist on 21st century warfare, and August Cole, a writer and national security consultant, Ghost Fleet gives us a glimpse into a very plausible world war with China and Russia. Though written as fiction, this book is very much grounded in fact, complete with references and sources throughout the book. Here’s the official synopsis:

The United States, China, and Russia eye each other across a twenty-first century version of the Cold War, which suddenly heats up at sea, on land, in the air, in outer space, and in cyberspace. The fighting involves everything from stealthy robotic–drone strikes to old warships from the navy’s “ghost fleet.” Fighter pilots unleash a Pearl Harbor–style attack; American veterans become low-tech insurgents; teenage hackers battle in digital playgrounds; Silicon Valley billionaires mobilize for cyber-war; and a serial killer carries out her own vendetta. Ultimately, victory will depend on blending the lessons of the past with the weapons of the future.

Ghost Fleet is nothing short of a page turner, both because the narrative is fascinating, and because the authors constantly introduce the reader to interesting facts and technological innovations – the latter of which already exist in many cases. Personally, I love the combination of entertainment and learning.

If you’re looking for a great contemporary techno thriller, then look no further than Ghost Fleet. I can’t recommend this book to you enough.