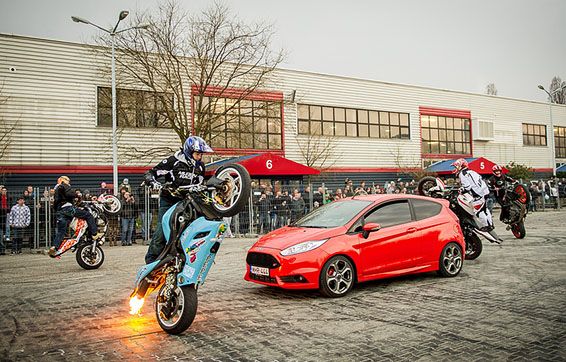 This year promises to be one of the most exciting years in automotive history. The 2014 model year treats car enthusiasts to plenty of sensational vehicles. Whether the person prefers a high-tech family sedan or a tire-smoking sports car, they will all be available. Here are three of the most interesting 2014 car models that are destined to tickle your fancy.

The twin-turbocharged V-6 engine leaps with inspiration even at low speeds. With 420 horsepower and 430 pound-feet of torque on tap, the sleek sedan is able to race to 60 mph in a few ticks over four seconds. The tuned-suspension setup enables the Vsport to stick to curvy roads like glue. I personally consider the CTS Vsport’s styling to also be among the elite.

Ford Fiesta ST
The 2014 Ford Fiesta ST stands as one of the most affordable performance machines on the market. Many driving enthusiasts proclaim that the Fiesta ST handles even better than its big brother, the Focus ST.

The Fiesta ST is powered by a unique three-cylinder, Ecoboost engine. Pumping out a total of 197 horsepower and 202 pound-feet of torque, the engine provides the rare combination of peppy performance and exceptional fuel economy. I love the fact that the Fiesta ST has torque vectoring control, which helps to keep the chassis balanced during cornering. Used Ford Fiesta still keep their popularity, so you may want to purchase one after it has been properly broken-in.

Chevrolet Camaro Z/28
For the first time in over a decade, Chevy is manufacturing its iconic Camaro Z/28. Unlike a traditional muscle car, the Z/28 Camaro is designed for the car owner that loves to drive on the track.

Power is derived from a massive V8-engine that puts out around 500 horsepower. Components such as the special cooling system and free-flowing exhaust come in handy when making sprints around a road course. While the power output is certainly impressive, the heart of the Camaro Z/28 is its remarkably road handling. The limited-slip differential and high-tech suspension system make it a legitimate track machine.

Anything we missed that just has to be on this list? Leave me a comment below! I’m open to suggestions, though I think I’ve made a pretty good start right here.

(Photos by Automotive Rhythms, Ford in Europe, and Yack Nonch)