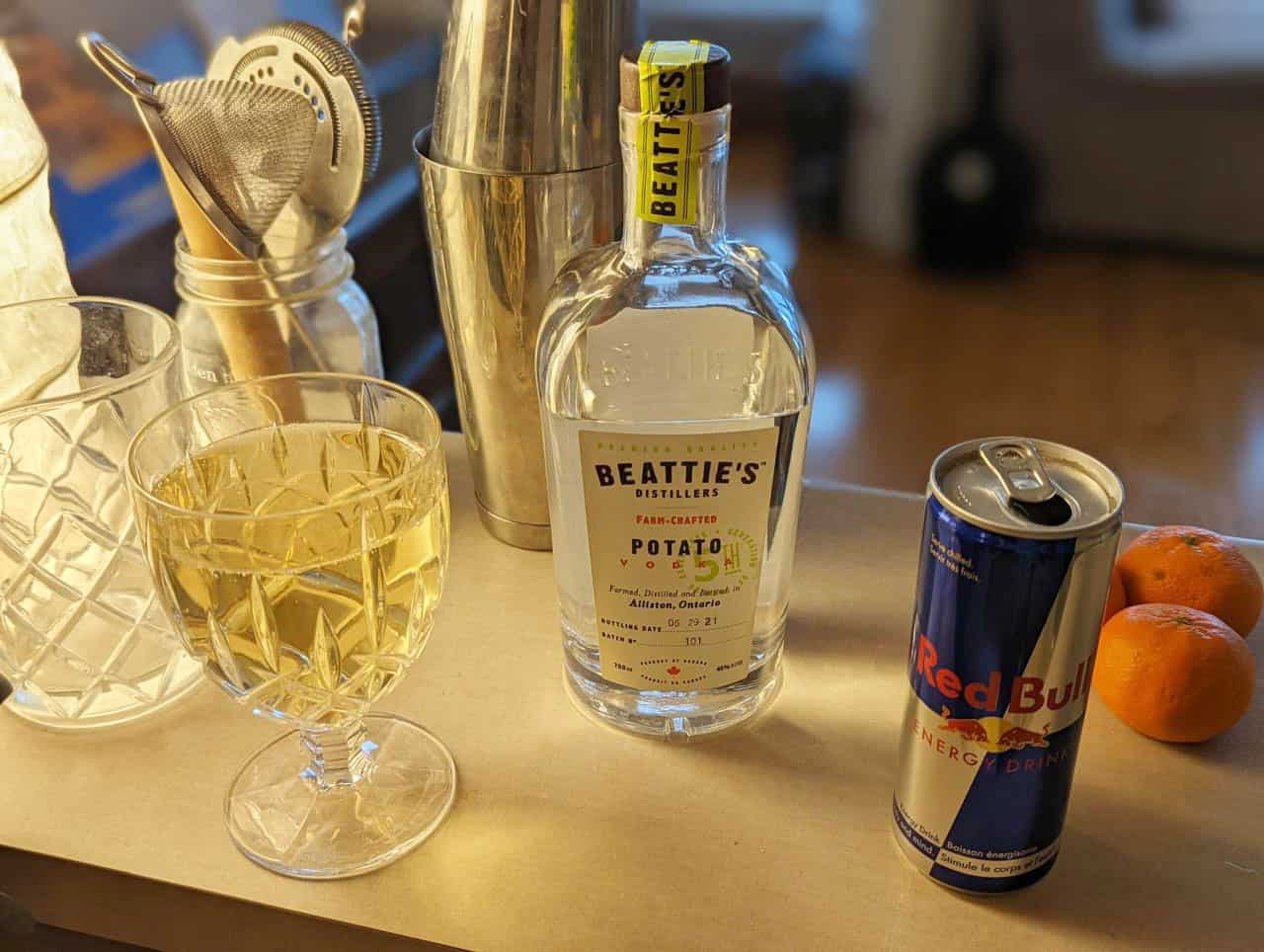 Looking for a fun and easy mixed drink to make at your next party? Look no further than vodka Redbull! This drink is simple to make and always a hit with partygoers. In this article, I’ll discuss the recipe for vodka Redbull, as well as some fun facts about this popular drink. I’ll also explore the origin of the name “vodka Redbull” and why it’s such a popular choice for mixing cocktails.

I first discovered this mixed drink while living in Europe. I was out at a club one night (Arena Club in Berlin, in case you’re wondering) and noticed everyone around me was sipping on something called a “vodka Redbull.” Intrigued, I ordered one for myself and quickly realized why this drink is so popular. The combination of vodka and Redbull is incredibly refreshing and gives you a nice energy boost – perfect for dancing the night away!

What is vodka Redbull and where did it come from?

Vodka Redbull is a mixed drink made from vodka and Red Bull energy drink. This popular mixed drink (not a cocktail, despite my best efforts to call it one) has been around for many years and continues to be a favorite choice for partygoers. Some people believe that the combination of vodka and Red Bull was first invented by accident, while others claim that it was created…

When vodka and Red Bull first met, they instantly hit it off. They bonded over their love of partying and having a good time. They soon became inseparable, and people started calling them “vodka Redbull”. They loved the name and decided to keep it. Over time, they became the most popular mixed drink in the world. Some called them the ultimate… power couple.

Plausible? Not at all. But I love the idea of there being two people, one named Vodka and one named Redbull, that met and partied. But regardless of its origin, vodka Redbull is now a favorite drink choice for many people.

Why is vodka Redbull so popular?

There are several reasons why vodka Redbull is such a popular mixed drink. First and foremost, it’s simple to make and doesn’t require any complicated ingredients or tools. Additionally, the taste of vodka and Red Bull together is surprisingly refreshing and not too sweet. Finally, the combination of vodka and Red Bull provides a nice energy boost, making it a perfect drink to enjoy at parties or other social gatherings.

Whether you’re looking for an easy mixed drink to make or simply want to try something new, be sure to give vodka Redbull a try! You might just find yourself becoming a fan.

How do you make vodka and Redbull?

Here’s how to make it:

And that’s all there is to it! Making vodka Redbull is quick, easy, and always a hit with partygoers.

What is the ratio of vodka to Red Bull?

There is no specific ratio of vodka to Red Bull that is required to make vodka Redbull. However, most people recommend using about 1 or 2 ounces of vodka per 8-12 ounces of Red Bull. Feel free to experiment until you find the perfect ratio for you.

What do vodka and Red Bull do to the heart?

There is no definitive answer to this question. Some people believe that the combination of vodka and Red Bull can be dangerous for your heart, while others claim that it’s perfectly safe. More research is needed to determine the effects of vodka Redbull on heart health. Until then, it’s best to drink responsibly and always consult a doctor if you have any concerns.

Is vodka and Red Bull nice?

Yes, I think vodka Redbull is a nice drink. It’s simple to make and the taste is refreshing and not too sweet. Additionally, the combination of vodka and Red Bull provides a nice energy boost, making it the perfect drink to enjoy at parties or other social gatherings.

What liquor is good with Redbull?

If you’re not a purist, then consider using tequila or rum instead of vodka. Or, if you want a non-alcoholic version, simply leave out the alcohol. Red Bull is the most popular energy drink to use for this mixed drink, but you can also try using Monster, MTN DEW® Game Fuel®, or Rockstar Energy Drink.

And I’ve seen that many people prefer Tito’s vodka for some reason, and others do Redbull soda, which is obviously not alcoholic. So, really, you can play around with this recipe to make it your own.

My favorite is the variation that uses 100% agave-based tequila, which I find a lot more delicious than using even a high-quality, potato-based vodka. But to each their own.

Vodka Redbull is a refreshing, popular drink that’s easy to make and fun for all. The simple recipe can be altered with your favorite liquor or energy drink flavorings, so you’ll never get bored of this delicious mixed drink! If you’re looking for an easy party cocktail idea, I recommend giving vodka Redbull a try today!

The Weirdest Things You Can Do in Las Vegas: A Guide to the Strangest Activities in Sin City