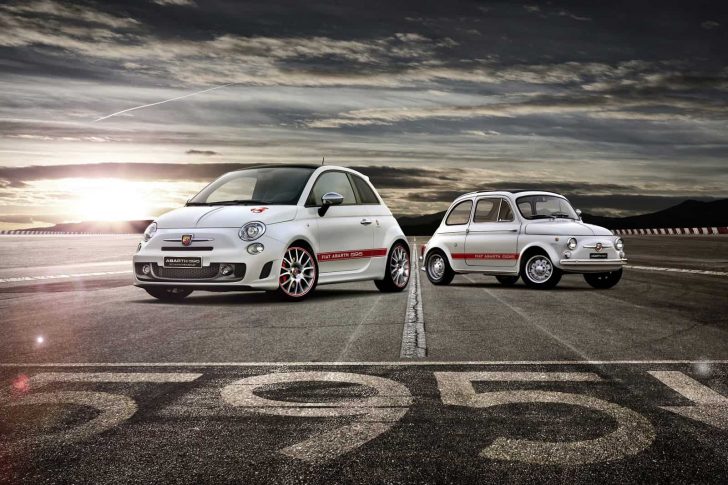 The Fiat 500 is a very popular car around the world; it’s small, nimble, and fun to drive.  The Abarth 500 is especially popular among the driving enthusiast, it’s a more powerful and sporty version of the standard 500.  Fiat has now launched a limited edition Abarth 500 595 Edition, which celebrates the 50th anniversary of the original 595 launched in September 1963 at the Turin Motor Show.

Only 299 Abarth 595 50th Anniversary Edition cars will be produced, the cars feature the same paint scheme seen on the original car from 50 years ago (see picture above), and old Abarth logos.

The Abarth 595 is powered by a 1.4 liter turbocharged 4-cylinder engine, producing 180 horsepower.  Power is sent to the front wheels via a 5-speed manual transmission.  This little car would be pretty fun to zip around town, and with the added power it needs upgraded stopping power and suspension.  Fiat beefed up the suspension and added 305 mm Brembo discs with 4-piston calipers.  For an improved soundtrack, Fiat has added a “Record Monza” dual mode exhaust system; it’s said to improve sound over 3,000 rpm.

Aesthetically, the upgrades include lots of stickers and logos on the outside.  The car rides on 695 Magnesio Grey wheels with a red stripe on the outer rim.  The interior is upgraded with two-tone treatment on the dashboard and the red and white leather bucket seats with “595” stitched on the headrests.

The Fiat Abarth 500 595 30th Anniversary Edition will be officially launched at the Frankfurt Motor Show.