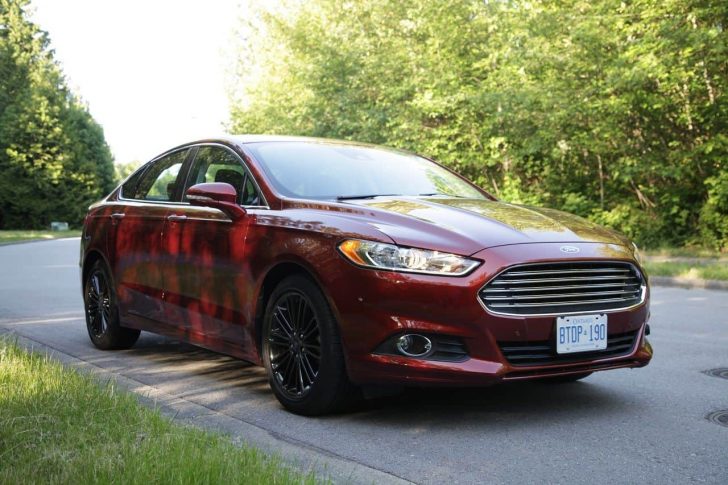 Last year I reviewed a pair of Ford Fusion (SE and Titanium) sedans for a week each, click here to see the full review. This week I had a chance to spend some time behind the wheel of the 2014 Ford Fusion SE with a tiny 1.5 liter EcoBoost engine.

I’m not going to go into too many details like I normally do on my reviews, because there isn’t that much of a difference between the two model years, if you want the details, head on over to my 2013 Ford Fusion review from last year.

The major change for 2014 on the Ford Fusion is the addition of the new turbocharged 1.5 liter EcoBoost 4-cylinder engine with direct injection. Other minor changes include new exterior and interior colors and optional inflatable seatbelts for the rear passengers.

Ford engineers focused on making the new 1.5 liter EcoBoost engine lighter and reducing internal friction, giving the car better fuel efficiency. The engine features a clutched water pump that decouples the water pump in cooler temperatures instead of pumping coolant through the engine at all times. This system enables the car to warm up faster, and reducing fuel consumption in cold conditions.

Doesn’t matter which numbers you choose, for some reason I was nowhere close to either of the numbers. I averaged 10.2 L/100 (23.06 mpg) in all city driving. The weird thing about my fuel consumption number is that the 2013 Fusion SE, with the 1.6 liter engine I reviewed last year, got much better numbers than the smaller engine. I even commented on how I was able to get pretty close to the manufacturer’s estimated numbers on that car. I did drive the 2014 Fusion in quite a bit of stop-and-go traffic, but I was still expecting better numbers.

Fuel consumption aside, the 1.5 liter engine might sound small but it has plenty of power. I was pretty surprised by it, you do need to put the foot down for aggressive passing, but in normal city driving, the car feels powerful enough and I didn’t feel the need to “wish” for more power. My one complaint is the automatic transmission, which can’t be downshifted when driving in normal mode and the transmission is reluctant to downshift by itself. So if you want a burst of speed, you’ll need to shift from “D” to “S”, and then click the downshift button. A manual transmission with this engine would make it quite good, or paddle shifters that work in drive would solve this problem.

I was already a big fan of the styling on the Ford Fusion, nothing has changed in this department and I still like it as much as before. I think this is one the best looking cars in this segment, along with the Mazda6. The Fusion is definitely a head turner, especially with the right exterior color and the optional 19” wheels (not equipped on our test vehicle).

The interior on the 2014 Fusion is the same as last year’s car, but now you can get “Dune” color in leather or cloth. The interior is very comfortable with plenty of space in the front and good space for the rear passengers, the seats are soft and feel good on long drives. The interior is very quiet; the Fusion is one of the quietest cars in the mid-size segment. I found the engine to be quieter than some of the larger 4-cylinder engines I’ve driven recently.

As for pricing, the 2014 Ford Fusion SE with 1.5 liter EcoBoost starts at $24,599 CAD; our review car was loaded up and had a final price of $34,954 (including $1,565 destination/delivery). Our review Ford Fusion SE came with the following optional equipment:

Overall, the Ford Fusion is a great looking car that’s has premium/European looks on the outside and has a very comfortable interior, which is as quiet as some of the luxury brands. You also get a lot of engine choices in the form of 1.5, 1.6, and 2.0 liter EcoBoost engines. If turbo-engines are not your thing, you can choose the 2.5 liter 4-cylinder and there’s also a hybrid and a plug-in hybrid available. You can buy the base engine with minimal tech gadgetry or load it up to where the car almost drives itself. For more info visit Ford’s website.