You’ve all undoubtedly heard of Adblock, Adblock Plus, and a wide range of other advertising and tracking related blockers available for Firefox and Chrome.

Everyone uses them, myself included. In fact a few months ago I went so far as to say that I absolutely hate advertising. Harsh words, especially as someone that earns a living off of banner placements…

Since then, my feelings have changed a bit. I’ve realized that it’s not actually advertising as a way of selling products that pisses me off so much – though there are many adverts that I hate – but that advertisers often do everything they can to track potential customers around the internet. Since the Snowden revelations, well… let’s just say I don’t take kindly to being tracked and logged everywhere I go, especially by entities whose sole calling is to generate profits. No thanks!

Possibly internet utopia, but let’s pretend for the sake of this article that this is a bad thing. We don’t want to be tracked and targeted by advertising networks, but we also don’t want to block all the adverts either. After all, some are actually useful, and the people running these sites (like me) need to make money somehow. So what’s a person to do?

The Electronic Frontier Foundation, or EFF for short, recently released a new kind of privacy addon. It’s made to replace traditional ad blockers, and it works very differently. Here is how the EFF describes it:

Privacy Badger is a browser add-on that stops advertisers and other third-party trackers from secretly tracking where you go and what pages you look at on the web. If an advertiser seems to be tracking you across multiple websites without your permission, Privacy Badger automatically blocks that advertiser from loading any more content in your browser. To the advertiser, it’s like you suddenly disappeared.

The key difference between this and traditional advertising blockers is that this one is intelligent. Instead of using a master “blacklist” to decide which adverts and networks not to display, Privacy Badger detects whether or not an advertising is trying to track you using cookies and other means, and blocks the advert before it can do everything. 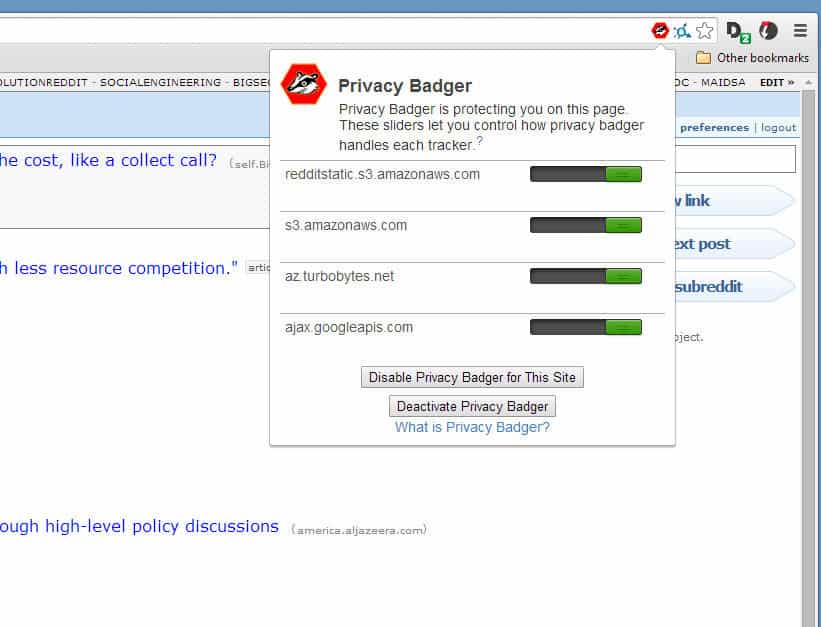 This is exciting because it means no blacklists, and only advertisers that attempt to track you are punished. The rest are able to display ads as per usual.

The sad reality is that most advertising networks are indeed actively trying to track their users, which means that when you install Privacy Badger, for better or worse, you still won’t be seeing a whole lot in the way of advertising. In any case, it’s a great piece of software and I highly recommend it over the traditional blockers. Apart from this tools a good way to protect your privacy is choosing among the many VPNs reviewed by the Anonymster’s team.