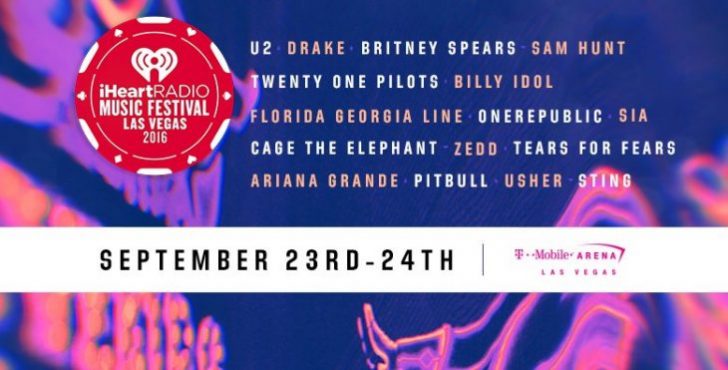 Place To Be – 2016 iHeartRadio Music Festival

Get Your iHeartRadio Music Festival Tickets And See Britney Spears, Sia, U2 and Drake Perform in Las Vegas September 23rd to the 24th. This is a gathering you don’t want to miss!

iHeartMedia has announced the line up for the 2016 iHeartRadio Music Festival. This legendary concert has been rewriting radio history year after year with astounding and unforgettable performances, and you don’t want to miss it. This year’s event will hold at the T-mobile Arena (the latest entertainment venue in Las Vegas) on the 23rd and 24th of September and will feature performances from Ariana Grande, Sia, Usher, U2, Pitbull, Drake, Sting, Sam Hunt, Zedd, Tears for Fears, OneRepublic, Billy Idol, Florida, Florida Georgia Line and Cage the Elephant. Los 5, winner of this year’s Macy’s iHeartRadio Rising Star competition, will perform at the festival.

For the 6th time running, the festival will feature special collaborations and surprise performances. September 23 (Friday) marks the beginning of the star studded weekend and will be hosted by Ryan Seacrest, who is the producer and host of “On Air with Ryan Seacrest,” his LA morning drive time show for 102.7 KIIS-FM.

On Saturday, September 24 the Daytime Village at the iHeartRadio Music Festival will return to the Las Vegas Village, which is across the Luxor Hotel and Casino with performances by Alessia Cara, Hailee Steinfeld, Jeremih, Cold War Kids, Bryson Tiller, Troye Sivan, Panic! At The Disco, DNCE, Daya, Good Charlotte, Sam Hunt and The Chainsmokers. Apart from live performances by emerging artists, the Daytime Village will also include interactive experiences and fan zones by iHeartRadio’s brand partners.

I bet you’re now thinking, “wow, this sounds really good, How can I get tickets to this music festival?” Not to worry, we’ve got you. We don’t want you to miss out.

Below, we’ve listed three ways you can get your festival tickets to the 2016 iHeartRadio Music Festival.

1. You can win tickets. Yes, you can. iHeartRadio is giving away a trip to the festival and a vacation to the Daytime Village for free. You can check out the Taste the Music contest and enter your name for a free VIP experience.

2. You can attend the Daytime Village, which is a mini-festival on September 24 at the Las Vegas Village. The Daytime Village will feature performances by Alessia Cara, Hailee Steinfeld, Jeremih, Cold War Kids, Bryson Tiller, Troye Sivan, Panic! At The Disco, DNCE, Daya, Good Charlotte, Sam Hunt and The Chainsmokers. Ticket sales have already begun.

3. Buy your tickets now from Ticket Liquidator, a one-stop online shop for finding tickets to the gotta-see games, the hottest shows & events. Plus, they have great prices too. Tickets are already on sale from $277 over there.

Originally published on September 14, 2016 in Music