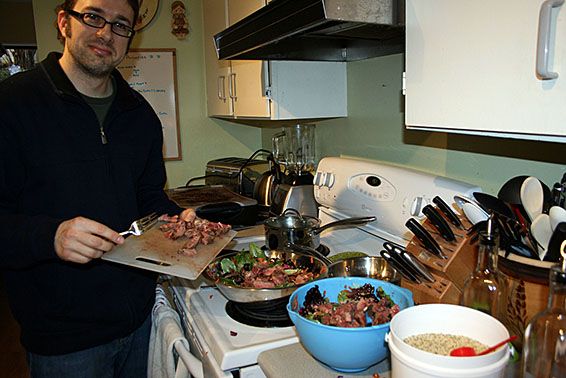 I’ve noticed an interesting phenomenon over the years: most people eat like absolute crap.

It’s true, if you’re reading this article, then there’s a very good chance that your diet is absolute garbage. Don’t look so shocked, you know it’s true. After all, the advice going around is plentiful, and most of it directly contradicts all the other advice. It’s information overload, and you know what? It’s really not your fault, you just don’t know any better. I probably don’t either, come to think of it. I’m nothing but a man who experiments with his own diet, so though I can’t tell you THE way to organize your diet, I can tell you what has done wonders for my health.

A History of Sickness – So… much… Pneumonia

Before I start prattling off my suggestions, let me tell you a little bit about why I started experimenting with my diet. In fact, no… I can sum it up quite simply: I was sick, like… all the time. I’m not kidding when I say that I was probably sick more often than I was healthy. I had everything from Tonsillitis and tonsil stones to frequent (more than twice a year) bouts of Pneumonia, the last time resulting in a hospital stay and some of the strongest antibiotics known to man. It wasn’t fun, and that last experience was the one to break the proverbial camels back. I had had enough.

So with that in mind, here are some dead simple changes that I made to my diet (we’ll forget about exercise for now) that transformed me chronically ill, to chronically healthy. In the last two years I’ve had one cold that lasted two days. That’s it… really.

But… but… water is disgusting!

You’re either going to laugh, or you’re going to go “shit, I’m the say when” when I tell you how I felt about water. In short, I absolutely hated the stuff. I thought that it “tasted” disgusting, and would instead consume massive amounts of soda. When I say a lot, I mean a lot. I used to keep a flat of Sprite under my bed, which I would crack open every morning when I got out of bed. Sadly, I’m not joking.

If you find water nasty, or simply don’t drink it, then you’ve got to get into the habit of doing so. I don’t care what it takes, but find a way. I drink a minimum of 3 liters of water each day, and you should too. You’ll think more clearly, you’ll feel stronger, and you’ll probably even feel a bit smarter. You’ll also need to drink a lot when you start taking Creatine, which I’ll explain a bit later.

Anything green is gross!

I’m going to start sounding like your mother here, but that’s just because she was right: you need to eat vegetables. No, scratch that… you need to eat a lot of vegetables. If you aren’t eating vegetables with every single meal, then you’re doing it wrong. Though veggies aren’t particularly filling, they are absolutely riddled with nutrients and vitamins which will keep you strong and healthy like ox!

Aside from the occasional salad covered in a thick nasty sauce, I would avoid vegetables like the plague. Now I eat veggies with every single meal, the biggest being dinner where I have a mountainous plate of the stuff. Peppers, broccoli, and cauliflower are all great places to start, and they’re really easy to make too. I simply steam mine.

Veggies are great, but…

You also need to eat meat. I’m sorry if you have a moral issue with eating dead animals, and believe me, I can appreciate that. But no matter your feeling, the inescapable reality is that we’ve been eating meat for a long, long time, and our bodies are rather tuned to the affair. I suggest eating a decent amount of chicken, beef, and organ meats like liver. If you can afford it, spring for the free range stuff, but it’s certainly not required.

Meat grossed me out as a child and teenager, and thus I largely avoided it. My health suffered immeasurably from this bout of insanity.

Well well, aren’t you an observant one! It’s true, what I’ve described is part of the paleolithic diet that I’ve preached many, many times. Sometimes when you say something enough, people actually listen to you. Lots of veggies, meat, and an avoidance of grains. That – combined with drinking a ton of water – and a few simple supplements I’m going to tell you about in a moment, was all it took to get me on a path to good health.

What kind of Supplements?

If you’ve ever seen a supplement store, then you know that there’s an absolutely dizzying amount of options to choose from. I tend to keep supplements to a minimum, but there is one that I highly recommend for anyone who is human, ie: you don’t have to be a bodybuilder to see the benefits.

If you’ve got the money for it (and thankfully it’s fairly inexpensive), then I recommend giving Creatine a shot. Not only can it increase your strength and power while you take it, but it has also been shown to increase both memory recall and cognition. That’s not a bad deal for about $15 a month if you ask me.