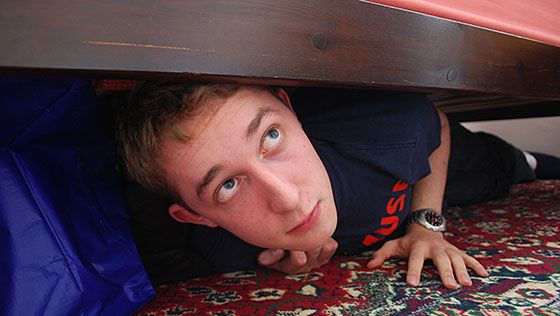 Every day, I find myself faced with the prospect of dealing with someone I don’t like – I can spot them a mile away. I see their enormous girth, right before I catch that look in their eyes – the look that says “I’m morbidly obese with 3 divorces under my belt and I’m angry!”. It would be unfair of me to just pick on the morbidly obese, though – there are so many other types of customers that grace my workplace with a blank stare and an icy determination to ask me mountains of questions that I simply have no interest in answering. So what’s a man to do? I could provide the kind of customer service that so many middle managers expound as the path to corporate greatness, or I could take another path – a path that allows me to shirk my duties and continue looping Paul Rudd’s Computer over and over again.

What I’m about to share with you is a series of simple, but effective, tactics and strategies that I’ve developed on the field over the lengthy course of my “career”. These strategies are not for the faint of heart – the risk of discovery is ever present, but the rewards far outweigh the risks. If you have the iron resolve to ruin your coworkers’ day and provide terrible customer service, read on.

This is by far the easiest method to avoid dealing with a customer, but also the most effective. If your place of work has a clear view of the entrance, chances are you’ll have enough time to run and hide in a storage room or take a well-timed bathroom break. The result is that the customer gets left to his/her own devices, or even better… someone else has to deal with them. I’ve used this method numerous times to escape an elderly woman with bad English.

Something to be aware of if you have co-workers – they will catch on and start trying to run the moment they see you running. They probably won’t know why, but they’ll just start running. The solution to this problem is to either run faster, or push them out of the way.

Ducking Out Of Sight

This is another favorite of mine, and one that I employ when I don’t have enough lead time to run away and not be seen. The principle behind this is very simple – the moment you see the customer, duck or roll behind a nearby desk or stack of boxes and wait until the danger passes. If you’re stuck at a desk, this is a perfect opportunity to crouch under it and pull your chair in close – chances are no one will notice.

I’ve used this technique in combination with running away to avoid a woman whose over-the-top sugary sweetness made me nauseous each and every time she called or decided to stop by with her demonic children for an impromptu visit. A short dash to the shipping area followed by a crouch and prone to the floor and I was safe. My manager on the other hand? Not so much.

This is the most difficult technique to master, but the applications are endless. Using The Vanishing Act doesn’t require any notice of an impending customer, but the trade off is that you’ll have to deal with the customer for at least a brief amount of time. The technique goes like this… the customer catches you unaware – you haven’t been vigilant, and now you’re paying the ultimate price – or so you think. You could actually buckle and do the job you’re being paid for, or be awesome and avoid further interaction with the customer. In order to do this you need only continue listening and making small talk with the customer while slowly backing away. The moment the customer is distracted or has become absorbed in his/her own nonsense, slide behind something such as a pillar or shelving unit. If you deal with the same kinds of customers that I do, the person probably won’t even notice and instead carry on talking, or find another hapless victim to annoy.

I recently used this technique in combination with running away to avoid a woman who, days before, had explained on the phone that she was now missing both her legs, and had recently been poisoned by agents from her government. I quickly realized that she did in fact have both legs and, as I’m sure you can imagine, I wanted none of that. After a brief period of feigned interest and stealthy backwards shuffling, I was home free. This was especially satisfying because a fellow co-worker and friend managed to catch her gaze, and she subjected him to hours of rubbish for a measly $200 sale.

Putting It All Together

If you’ve managed to have success with these strategies, you’re well on your way to becoming a terrible person. These are but a few techniques in my array of customer evasion techniques and I encourage you to experiment and find what style works best for you. With a little bit of practice, you too can reduce exposure to even the most annoying customers and continue doing something more productive, like finding another job – believe me, you aren’t being paid enough.