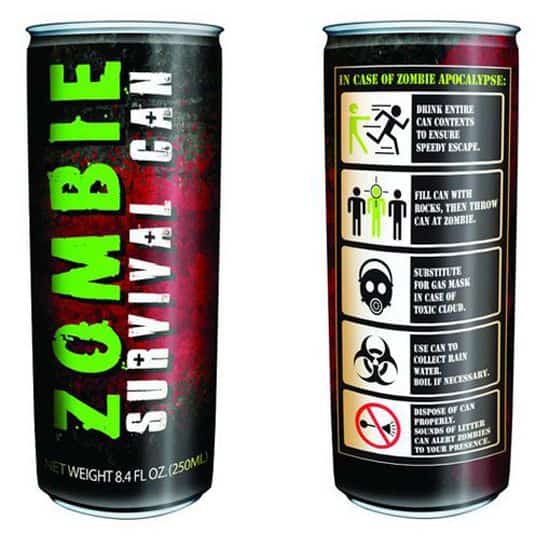 I’m not really sure why most guys in their 20’s and 30’s are so obsessed with zombies?  Every time I have a conversation with these “young men”, the subject of a zombie apocalypse is brought up.  Anyways, to keep these guys happy and energized, now there is an energy drink specifically formulated to give you energy in case there is an attack from the walking dead.

Outrunning the walking dead takes all the energy you can muster after the zombie apocalypse befalls humanity. To give yourself an edge, try the Zombie Survival Energy Drink. Especially formulated to keep you going when the walking dead are on the move, this 8.4oz drink will leave you feeling alive, even when you want to be among the dead!

The Zombie Survival Energy Drink not only acts as an energizing agent but also can be used as a weapon.  After drinking the entire can of the energy drink, the can can be used as a weapon by putting rock inside it and then throwing it at the zombie, ideally you would want to hit the zombie in the head for maximum damage.  The empty can can also be used as a gas mask in case of toxic gas leak, although, I’m not sure how that would work.  The can is also useful for collecting rain water, in case there is no fresh water available.

The Zombie Survival Energy Drink comes in a case of 24, 8.4 oz cans and is currently available for pre-order at a price of $40.99 for the case.  Estimated shipping date is September 2010, just in time for classes to start and the apocalypse to begin.