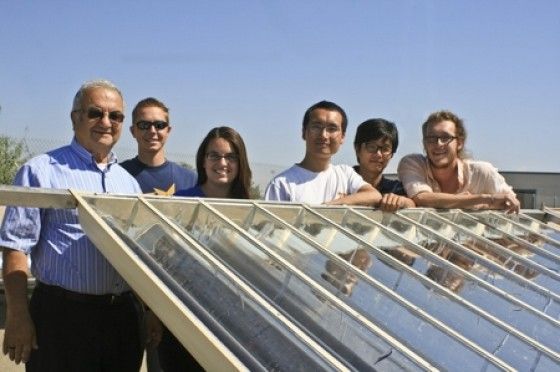 A while back, you may remember that a 13-year old student, Aidan, from New York was talked about quite a bit online because of his school project in which he claimed that his ‘Solar Tree’ had made a breakthrough in solar array efficiency. It was reported that his PVC tree was able to produce 20% more electricity and able to absorb light for 2.5 hours longer, with even better results in the winter months at 50% efficiency. His ‘Solar Tree’ replicated the natural design of an oak tree to see if the configuration would be an improvement over the standard grid array that is so commonly seen. Unfortunately for Aidan, people jumped the gun and his ‘Solar Tree’ was not more efficient, as he had suggested; it was a case of incorrect calculations and various blogs promoting the so-called “breakthrough”. But really, who cares if he was incorrect? What I find more interesting about that story is that a 13-year old is interested in science, the environment, and thinking outside the box to contribute to society. I really hope Aidan did not get discouraged and works even harder to come up with something else.

It’s because of 13-year old students like Aidan that a group of University of California student researchers were able to develop a system called External Compound Parabolic Concentrator (XCPC). The system claims to generate solar thermal efficiency of 60% at temperatures reaching up as high as 400 degrees Fahrenheit, which was previously only seen in systems that tracked the sun.  What makes the entire design unique and efficient is that the collectors are completely stationary. In traditional systems, the solar collectors must move and track the sun in order to achieve optimal energy production. This creates the need to have additional equipment – which can become costly – and they also have to be maintained more often. And unlike tracking systems which only work properly on clear, sunny days, the XCPC can work in hazy conditions because the collector tubes are able to collect both direct and indirect sunlight. The heat generated by the system can be transformed using existing technology available to us for things such as cooling, heating, and other various applications.

Because of the skepticism the XCPC has received, the team even went on to install a mobile office trailer at their facility and are cooling the trailer using high performance air conditioners which are powered by 160 XCPCs in two parallel rows. This is believed to be the first working system of its kind and is potentially a cost-effective way to reduce greenhouse gases and fuel consumption. Because the XCPC is a stationary system, the tube collectors can be installed numerous ways, including on rooftops and walls. This type of flexibility is not feasible with the traditional thermal systems that rely on tracking. The XCPC system is just as efficient as tracking systems, cost-effective, low maintenance, and can be used in more applications. Let’s hope more testing can be done on the system and it comes to the market place to not only save businesses money but reduce our carbon footprint.

UC Merced team was led by Professor Roland Winston and a group of 30 different students of various educational backgrounds over the course of two years. For more details, see the UC Merced page.