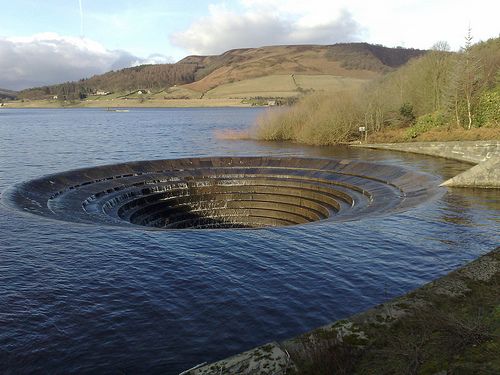 Those that know me would agree that I have somewhat of an obsession for all things Deux Ex. After having played the original back in 2001, I was hooked. When I see an opportunity to write an article on a concept or piece of technology that ties into that universe, I pounce on it.

What you’ll find below is a collection of the world’s largest spillways; massive structures delving deep into the earth to drain and divert water from reservoirs. These colossal structures are impressive in scale, and interesting to look at as well. It seems that even the team behind Deus Ex: Human Revolution agreed, as they’ve managed to incorporate what appears to be a gigantic spillway into their latest teaser trailer.

I’m going to go out on a limb here and suggest that there are probably no people kayaking or swimming in the area.

This looks like a shot straight out of the tropical world of Far Cry. I can’t imagine how workers support this structure when the water level is low; perhaps they land on it using helicopter?

2 comments on “Tunnel to The Center of The Earth? World’s Largest Spillways”