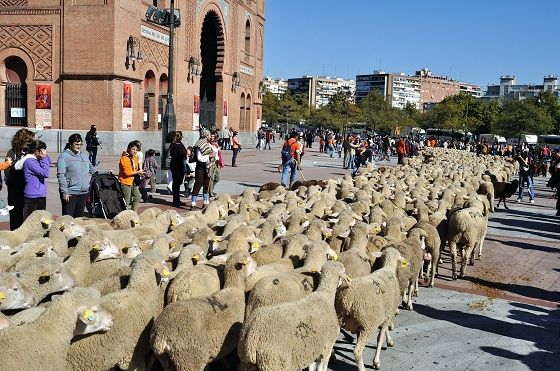 Every year at the end of October, the streets of Madrid, Spain are taken over by thousands of sheep instead of cars.  The event is called Fiesta de la Transhumancia (Transhumance Festival) and is sort of an homage to the farming community and the migration of livestock (mainly sheep) to the south of Spain for the winter months.

The migration of livestock to the south has happened for centuries where the weather is warmer in the winter and farmers move their livestock from the cooler mountainous regions which soon become covered with snow.  The warmer weather of the south allows the livestock to feed on grass during the winter.

The Transhumance Festival was started in 2001 and is more of a party rather than an actual migration of sheep.  The real migration usually has already happened and each farmer brings just a few sheep to the party which turns into an army of sheep.  There are several other events like this in other cities but those are much smaller, the Transhumance Festival has turned into a major tourist attraction in Madrid.  Farmers dress in traditional clothing to make the event more festive, music is blasted as a parade of farmers, followed by sheep, marches through the streets of Madrid.  Of course, having thousands of sheep marching through the streets does leave a bit of a mess which is cleaned by a small army of cleaners, following the sheep.

So if you’re planning on traveling to Madrid, Spain at the end of October, you should check out the Transhumance Festival.  Just make sure to book your hotel and travel accommodations well in advance, as the prices go up significantly for the festival. You know the drill, pretty standard… no reason to be sheepish about it.