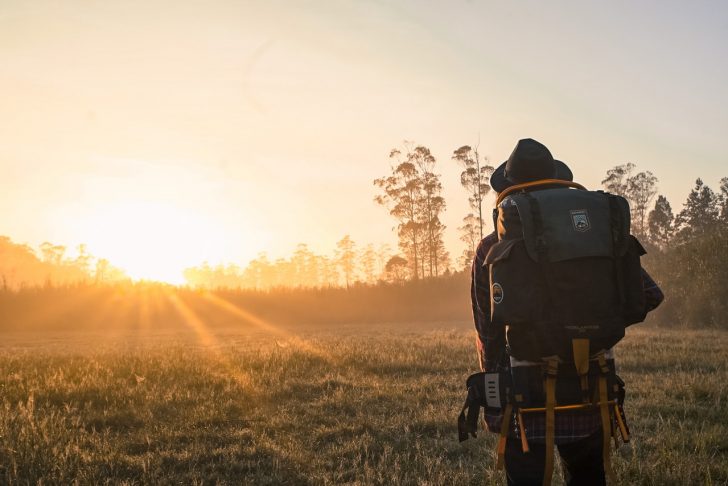 There are 4 types of travelers – Which one are you?

Everybody likes to travel, there are simply no exceptions. It’s like the art of traveling is in our DNA as a species. There are very few instances where somebody would go to a different environment and not find anything that’s fascinating for them.

This fascination draws us to leave our homes, travel around and get to see as much as possible. However, everybody has their own way of undertaking this endeavor. Everybody has their goals when traveling to a different country, but there are still ways to boil them down to just 4 types of people.

In this article, we would like to familiarize you with these 3 types and maybe you can find a characteristic that suits you! Maybe one of them will be an exact carbon copy of you, who knows. But the self-awareness that you will gain from this article could be a changing factor in how you plan your travels in the future.

Type 1 – One With Nature

The first type of traveler is the one that wants to take as much spiritual value out of their trip as possible. It may not be obvious on the surface, but it’s very hard to experience true spiritual freedom in a different country even if you try to practice their religion while you’re there. The act is so unfamiliar to the brain that it doesn’t perceive it as something relaxing, rather something that requires focus and attention.

Therefore, whenever travelers visit a different country for its nature, it’s more like the brain seeing something it’s already seen, but in a different shape or form. Thus, this gives us the feeling of not only seeing something new, fascinating and beautiful, but also something resembling home as we always compare the nature of what we visit, to the nature that we know back home.

Nature traveling has been incentivized in almost every country. It seems that most tourist companies are stopping to focus their attention on things like expensive hotels and city guides. We are starting to see a new trend appear right in front of us as nature-friendly tourism revives itself.

In fact, it was so popular in countries like Canada that almost every tourist company, including the government ones, was focusing on promoting the lush nature of the country. It got very popular very quickly, thanks to the thousands of photographs that people were sharing the amazing mountainous views of the Canadian north. It was so popular that local companies started to base their entire marketing campaigns on nature. One such example is when local offline casinos (which are mostly in the South) started to promote themselves to tourists based on the nature that was surrounding them. However, it was soon adopted by online casinos as well, as they started to offer Canada online casino promotions with things like free tickets to Nova Scotia’s lakes in the Autumn where the trees are very colorful, or free rides from the East coast to the West coast.

No matter how we look at it, the nature tourist is going to continue getting bigger and bigger. Countries that don’t necessarily have distinctly notable nature may be left out of this, but the good news is that nature travelers tend to travel around multiple countries to see all of the nature of the region, rather than the country itself.

If you’re a nature traveler, here’s what’s most important to you – the distance, the season, the difficulty.

Most nature travelers don’t worry about the price because it’s much cheaper than any other guide you can possibly sign-up for. The distance determines whether you can make it by the end of the day, the season determines if you’ll see the region in its prime, and the difficulty determines whether you should hire a guide or go by yourself.

The Urban Lurker is a traveler that tries pretty much everything not to leave the city at all costs. The only time they get to see some nature if they are moving from one city to another in the same country or in the same region.

The main attractions for the Urban Lurker are historical architectural sights, new and modern designed buildings, community gathering areas and pretty much everything else you may find in a city that has some history behind it.

These travelers are not very keen on traveling to small towns, knowing that they may not find anything fun to do there, which is why you’ll mostly see them in the capitals of various cities, and maybe in similarly large urban areas across the same country.

Even though it may seem that these types of travelers are the ones that would spend the most on their trip, there is still another type that manages to beat them in their spending habits altogether, but before we move onto them, let’s see how tourist companies accomodate such travelers.

The main goal of such a traveler is usually to find a cheap hotel with some kind of internet. However, their ultimate goal is to find a reasonable Airbnb. Once this has been squared away, the main attractions remain the same. Historical districts in the city where they can see preserved buildings and ancient restaurants to dine in. When it comes to visiting the living streets of the city they’re visiting, it doesn’t strike them as necessary to find out about them.

These are the types of travelers that like to spend maybe 2-3 days in the same city depending on its size and experience most of the tourist attractions it can offer.

If you’re an Urban Lurker, here’s what’s most important for you – the price, the size, the complexity.

In terms of price, Urban Lurkers mostly associate it with their accommodation. As already mentioned this part needs to be as cheap as possible, as 99% of their time will be spent outside, trying to see the city. The second is the size, which will determine how long you will be staying in a particular city. The bigger the better as you can justify a longer stay without getting bored.

And finally, the complexity. What this means is that the streets are very well inter-woven, meaning that you don’t have to travel on the same district too many times to experience everything in the city.

In most cases, this includes traveling outside of the large cities and meeting communities in small villages nearby.

The reason behind this is always the same. Large metropolitan cities are always a mix of different cultures rather than the location of a dominant one. However, in rural areas, you get to see a more centralized approach to life. Everybody seems to be the same in the way they live, which makes it a more accurate study case compared to the large cities.

These types of travelers are always prepared to learn at least some of the local language before visiting the country. This is mostly done in order to truly understand what drives the culture in the country or community they are visiting.

In most cases, knowing the local language earns them a seat at the table or a bed in somebody’s house, which makes them one of the cheapest travelers out there. I don’t mean cheap as an insult though but as a purely budgetary argument.

The most they spend is on the plane ticket and transportation outside of the cities.

This is how Culture Freaks usually structure their travel plans. First, they visit the city’s community gathering areas, which are mostly dominated by young children. By getting to know the young, the Culture Freaks get to understand the current and future values of the country. Once this is finished, it’s time to move to the rural areas where slightly more older citizens tend to reside. Once there, they get to witness the true cultural cuisine and understanding. This gives them the more ancient cultural experience than they’d ever get in the city.

If you’re a Culture Freak here’s what’s most important to you in a trip – the history, the religion, generational divide, urbanized and non-urbanized areas.

The history of the country you are visiting is the primary source of the culture you are looking to get yourself acquainted with. As for the religion, it’s usually directly tied to the history of the location. The more religious the people are from the country you are visiting, the more culture you are expecting to familiarize yourself with. A for the generational divide, you seek it because you want to see how globalism has affected the nation’s youth and how the older generations cling to their past ideals. The urbanization of the country is less important to you, as you know the most cultural experience you will have is in the rural areas.

The Resort Hogger is usually not too interested in the history and culture of the country they are visiting. In most cases, it’s about going to an extremely luxurious resort and having the time of their lives.

In that case, we can technically say that the Resort Hogger is more interested in nature rather than anything else. But the interest in nature is not nearly as strong as with the “One With Nature” traveler. It’s about the beaches and surrounding flora that needs to be top-notch.

These types of travelers are the biggest spenders, meaning that they have the largest budget and are usually not the ones to skimp on paying extra to have a better time. Things such as a luxurious suite next to the pool, or a relaxing yacht ride into the nearby island chain are of utmost importance.

The only other focus for the Resort Hogger is the cuisine of the region they are visiting. If it’s different, surprising and nothing they’ve ever tried before the better they will feel about their trip.

In most cases though, they find themselves bombarded with more seafood than they could possibly eat.

If you’re a Resort Hogger, here’s what’s most important to you on a trip – the climate, the hotel, the cuisine.

The climate is very important if it’s a tropical or a subtropical climate, you’re more than happy to book a flight immediately, but if it strays away from any of those, you tend to second guess yourself. The hotel is the icing on the cake for you. The more pools, bars, restaurants, and clubs it has on its own resort the better as you don’t have to walk around too much. Finally, the cuisine, the more elaborate and “spicy” the dishes are in the region you are visiting, the more enticing does it sound for you. It’s likely that you enjoy Mediterranean food the most, so you always try to compare it with the place you’re going to.

Originally published on November 18, 2019 in Travel