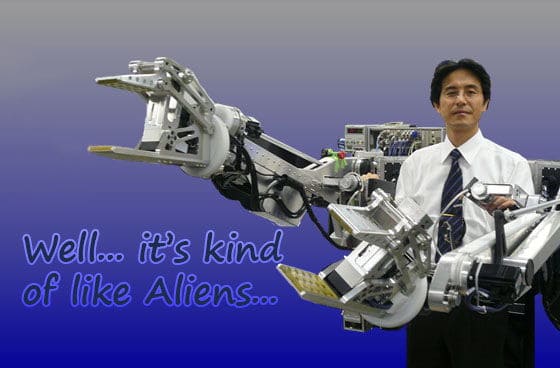 As anyone who knows me will attest, I’ve had a hard-on for Aliens since about as far back as I can remember. I have wonderful parents who allowed me to watch it as a child, and I immediately fell in love with the movie. The Colonial Marines with their awesome guns, and dearest Ripley with her massive yellow powerloader. But exoskeletons like that are just a product of science fiction, right?

Well, not exactly, and you knew that from the title anyway, but please pretend to be surprised here for a moment. Anyway, a subsidiary venture of Panasonic – known as ActiveLink – is developing two powerloader exoskeletons capable of granting the wearer an additional carry strength of 50kg and 100kg respectively. Intrigued yet? Watch the video, it gets better.

Okay, I admit… the suit doesn’t quite look like the one that Ripley wore in Aliens, but cut them some slack here; the Colonial Marines had a few hundred years on these days. I think that given a few years, some intensive R & D (or watching Aliens and possibly Gundam for inspiration), and a whole lot of money, we’ll see a powerloader that’s every bit as impressive as Ripley’s, and even better… it will actually be real.

The speaker in the video suggested that in the wake of the Fukushima accident, people may one day use suits like these to deal with incidents around the ol’ nuclear power plant where they work, or on construction sites. I agree with both points, but I think we’ll also see them used for a much wider range of applications; namely, combat. We’ve already see a few demonstrations by military oriented organizations, and given the vast amount of money and resources that the military has, well… it’s only a matter of time until they perfect the technology, and we started seeing soldiers wear it on the battlefield.