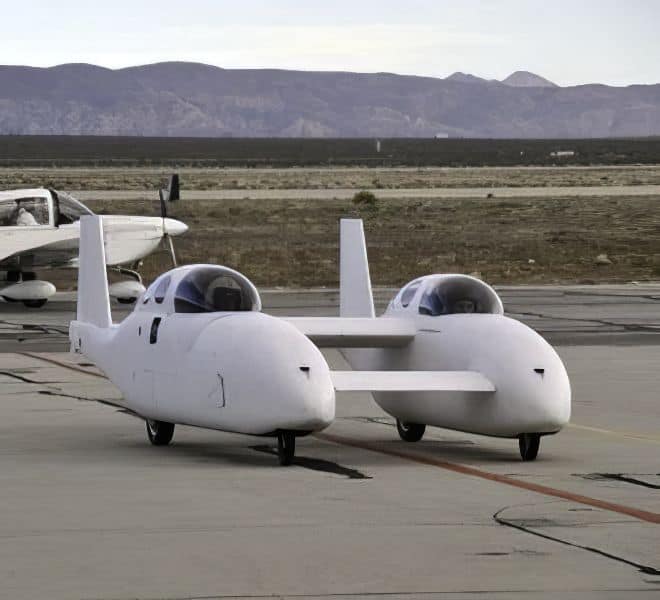 The team over at Scaled Composites has just unveiled their latest project known as the Model 367 “BiPod” Hybrid. If you haven’t heard about Scaled Composites, this is the company that helped develop groundbreaking aircraft such as sub-orbital space planes SpaceShip One, SpaceShip Two, Global Flyer, and White Knight Two launch aircraft.

When Mr. Rutan was not working on the aircraft mentioned above, he’s usually working on other various side projects. Side projects such as the “367 BiPod”, which is a hybrid gasoline-electric “flying” car which grew out of a program to develop a rapid, yet low cost electric test bed using as many off-the-shelf components as possible for the project.

The team working on the 367 BiPod program noticed that the propulsion system characteristics of their electric test bed aligned with the drivetrain needs of a “roadable” vehicle, so they expanded their research program to implement a ‘flying car’ airframe. All this resulted into a completely different design which allowed the 367 BiPod to operate as a high performance airplane capable of STOL, which stands for short take-off and landing. It can also fly at a top speed of 200mph and a maximum range of 700 miles. And of course, it’s also capable as a road commuter vehicle capable of highway speeds and urban driving.

The 367 BiPod features a unique twin fuselage setup with a four-wheeled chassis that has two cockpits. The cockpit on the left is used for ground driving while the one on the right is used for flight operations. The wings and tail of the vehicle can be stowed in the storage area on the aircraft when using for ground operations. Each fuselage has a 450cc engine, which provides electrical power to the rear wheels and propellers (not fitted on in these pictures) located on the horizontal stabilizer. The aircraft also has lithium batteries located in the nose of the aircraft to provide that extra boost of power during take-off and in case there happens to be an engine emergency.

Scaled Composites have no plans for this aircraft in terms of producing the vehicle commercially but says that it will continue to test and develop the 367 BiPod’s configuration and the hybrid propulsion system it features. Anything learned from this project will help develop future aircraft configurations.

Below is a slide show showing off aircraft Burt Rutan has designed during his career.