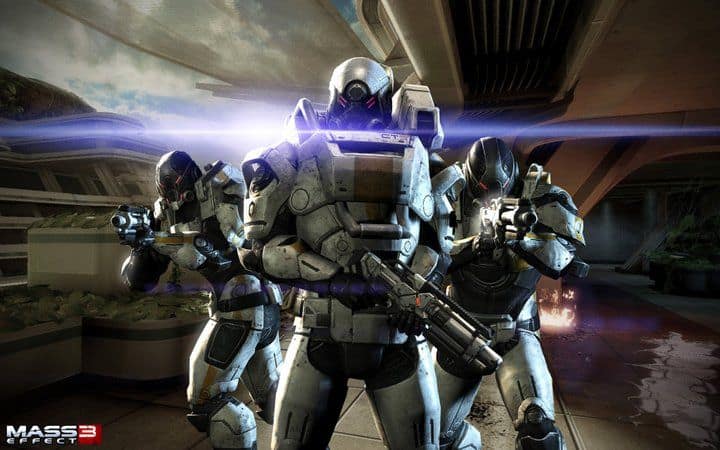 You may have noticed that here at Unfinished Man, we like a lot of things; boobs, alcohol, cars, boobs, gadgets and cars with boobs in them. Video games are also pretty high on the list for most of us, so with E3 just getting rolling, we’re in heaven.  Chad’s been diligently following Deus Ex and The Witcher, and I’ve been just about peeing my pants waiting for Mass Effect 3.

Straight from E3 a few hours ago comes The Fall of Earth, the first gameplay trailer for ME3- and some of the coolest new features have me salivating… like Mech Battles, which are going to be pretty necessary considering the enemies you’re facing. If you haven’t played the previous two games, what the hell is wrong with you? then I’m not going to spoil anything for you, but producers promise that you’ll be able to jump into the middle of a galaxy at war without getting too lost. I’d say that you’d definitely be doing yourself a disservice, however; though the original ME was pretty slow to get rolling, the continuity of decision making through the first two games effecting the entire third game makes both worth trying it out before ME3 launches. Check after the jump for more brand new E3 Mass Effect 3 videos.

I must admit, I’m really underwhelmed by the Kinect voice integration- I personally find that I react much faster by instinct with hot-keyed commands, and I’d feel like an absolute twat “talking” to my team to move the story along, but since you aren’t forced to use it, that’s a pretty minor complaint. If this new game can improve on the previous even half as much as ME2 improved on the original, then I’m expecting a nut buster of alien bisexual swinging, psychopathic kamikaze telekinetic combat rages, and craploads of futuristic weaponry and space vessels.

E3’s dramatic introduction and gameplay demo promise that the Earth will fall on Xbox, PS3 and PC in Mass Effect 3 on March 6th, 2012.