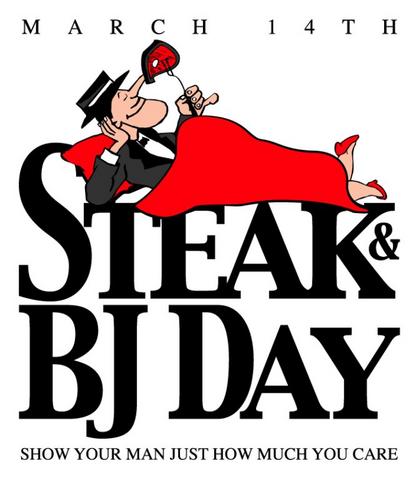 Men have very few holidays to call their own. Though there is Father’s Day for those with kids, and those days that merit a charitable purpose, there really isn’t a day in the year to celebrate the essence of manliness.

That is until 2002- when Tom Birdsey, a radio show host on FNX radio, started Steak and BJ Day on March 14th. Like a man’s version of Valentine’s Day, women are called to celebrate the men they love with two simplistic yet highly appreciated acts;  providing a steak and performing fellatio. For those of you who argue that Valentine’s Day is for everyone, you probably don’t have a girlfriend; the reality is that expectations for romantic gestures from men skyrocket, while only some women go all out in return. Before you get all up in arms about it, just think of how much nicer the world would be with more steak and more blowies.

Though only gaining some attention over the years, this day deserves more attention from the masses. So pass the word, go join the facebook event, and print out some novelty cards.