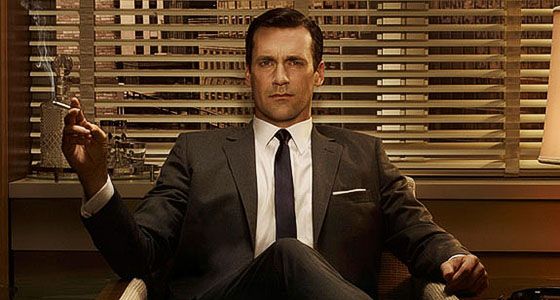 The fifth season of Mad Men premiers on March 25th on AMC. What does that mean for you? It means 50% more drinking, smoking and adultery on your television screen in less than a week. Despite his many quirks, like identity theft and tax fraud, Don Draper is one hell of a man. Here’s how you can steal his 1960s charisma for yourself.

Don has never heard of sick days. Whether he spent the night with a woman who is definitely not Betty or drinking Roger under the table, he shows up for work. He might be napping for three hours after he gets there, but he’s there, dammit. How does he do it? Well, he is always prepared. Lipstick on his collar? There’s a fresh shirt for that. Messy hair? There’s gel for that. Hangover? There’s whiskey for that.

Have you ever seen Don Draper in jeans and a hoodie? No, no you haven’t. Don dresses like he means it every single day. Dressing for success is key. Even when he doesn’t have it all figured out, he looks like he does. From head to toe, he’s always put together. A suit and tie go a long way, especially today. Nothing says “I’m the man who will make you $1 million in revenue and then sleep with your wife” quite like the Don Draper look.

Okay, so Don has selective loyalty at best. But he is always loyal to his children and Anna Draper, the woman who allowed him to steal her dead husband’s name just because. Sure, he might get drunk at Sally’s birthday party and ignore the fact that Bobby is a completely different boy when he turns 5, but he bought them a dog, so…whatever. In all seriousness, Don sends money to Anna for decades and gives us a rare look at his genuine emotions when she dies.

Once upon a time, Don Draper was a young, fresh-faced mink coat salesman. After a run-in with the one and only Roger Sterling, Don was convinced that he’d be the next great mad man. Even when Roger shot him down, Don found a way to get a 10 a.m. drink meeting with him. This lesson could really be either that ambition and persistence lead to great things or that the best way to land a job is to get your future boss so drunk that he hires you. We’re optimists, so we’ll go with the former.

The day is not over until Don belittles Pete or Peggy at work, preferably both. If you want respect from Don Draper, you’re going to have to work for it. And you’re probably going to cry, cover up a pregnancy or an affair, help someone commit tax fraud, get humiliated in front of your co-workers, and turn down several higher paying positions along the way. Respect is earned one inch at a time, but it only takes a second to lose.

Turn on the Charm

Model? Check. Teacher? Check. Successful businesswoman? Check. 1950s hipster chick? Check. Personal secretary? Check. While we can’t condone his cheating ways, Don Draper has some serious game. He’s the equivalent of the modern day Old Spice guy, but it’s not just his looks that reel them in. His quick wit, mystery and old fashioned charm are what help him seal the deal every single time.

What else has Don Draper taught you about being a man?

2 comments on “Lessons in Manliness from Don Draper”