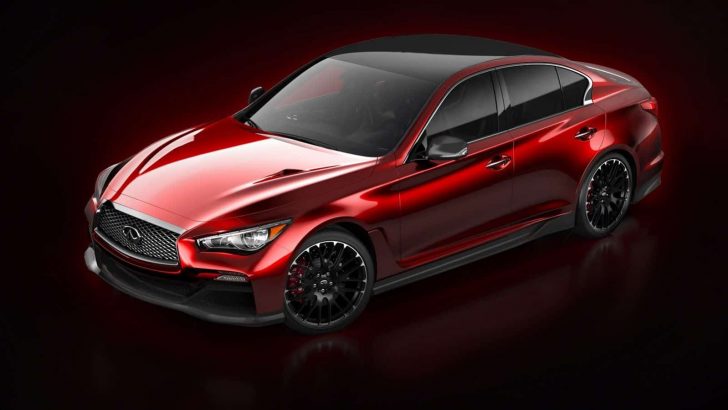 About a year ago we got our first look at the Infiniti Q50 sedan, the replacement for the G37 sedan.  I kind of liked the design of the car at the time, right now I’m not really sure whether I like it or dislike it.  Now one year later, Nissan is bringing the Infiniti Q50 Eau Rouge concept to the Detroit Auto Show.

The car is a concept for now and seems to only get visual/aerodynamic upgrades.  The upgrades are a result of the company’s work with Formula 1 team Red Bull Racing, and I’m guessing the name “Eau Rouge” is taken from the famous corner at the Spa circuit in Belgium… or maybe because the concept car is red?

The Q50 Eau Rouge gets a lower stance and is wider than the standard Q50 sedan, the car rides on 21” lightweight forged alloy wheels and sticky rubber.  The aerodynamic upgrades include a bunch of carbon fiber pieces which can be found on the front splitter, side skirts, rear diffuser, mirror caps, and roof.

I think the Infiniti Q50 Eau Rouge looks pretty decent, I doubt it’d look like this if it ever made it into a production model.  And it would be nice to see a real performance version of the Q50, and not some lame “IPL” badged crap they try to fool people into buying.  Via: Infiniti