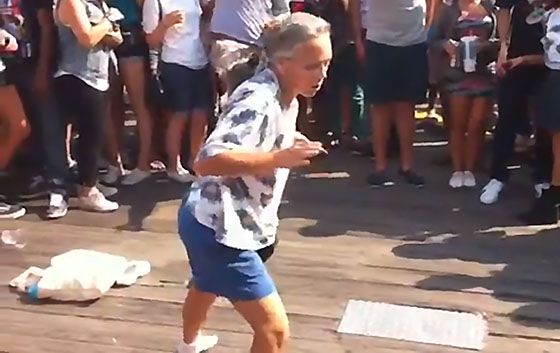 Getting Old, and Gettin’ Down – Grandma Tracy Breaks it Down

I was going to ask why someone would bother to record an elderly woman dancing, but decided the answer was pretty obvious. It’s because grandma Tracy is awesome.

This is how people should act when they’re in the departure lounge. I have no idea how old she is, but grandma Tracy can clearly break it down. She’s one of the most flexible people I’ve seen, and that’s all the more impressive given her geriatric disposition.

Now, the question is… can you dig it?

There’s a message buried in this incredible feat of hip grinding action. The fact that this woman is clearly ancient and can move around like a break dancer half her age is impressive, but more importantly she seems to be having a blast doing it. Is she simply high on cocaine and hallucinogens, or is it something more?

I think it’s important to maintain a child like energy, especially as we start getting older. All too often we become bitter and jaded from the slew of annoying people we deal with on a daily basis, or the bleak rainy weather that enshrouds our locale 9 months of the year.