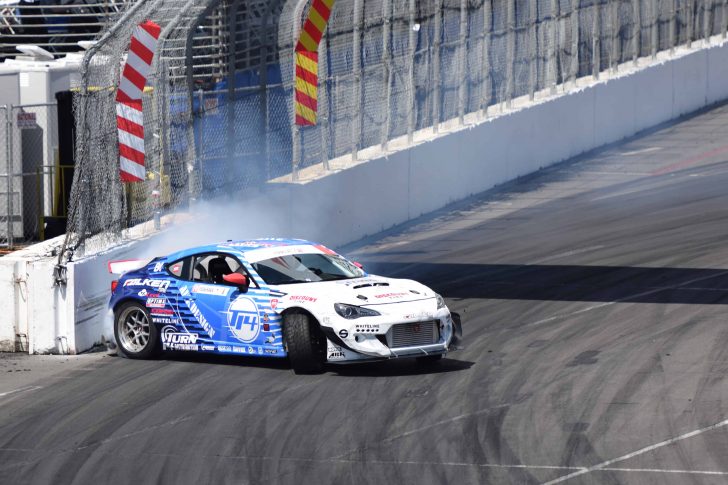 I would argue that one of the most fun things you can do with your car, is kick that back end out and slide it around a corner. Is it the fastest way to get around a corner? No. Are your tires happy with you afterwards? Of course not. But there’s something about letting your car get a little bit sideways that is so raw and exciting. You know you shouldn’t be doing this, the car was never designed for this, and yet you did. Now imagine putting nearly 1000 horsepower into your car, and then throwing it sideways towards a concrete wall. Welcome to Formula Drift, Long Beach.

I have been going to the opening round of the Formula Drift series for three years in a row. It takes place in Long Beach, California on what are essentially shut down public roads. Each year I notice some distinct changes and progress, which is good given the relatively young age of the series. This year was no different, and with the progress came stronger battles, and overall a better show.

All Killer, No Filler

One thing I noticed right away was the speed at which things were going for qualifying. For those of you who aren’t familiar with the sport, each round is a two day event. The first day consists solely of qualifying passes, in which one car runs the course to generate a score. That score will determine who is in the top 32, as well as establishing the competition bracket. In the past this system was plagued with issues, as upwards of 60 drivers would enter in each round. That meant qualifying took far too long to complete, and over half the field ended up sitting out after the top 32 was established.

This year marked the first time in which Formula Drift actively enforced their Pro and Pro2 divisions. Only the top 32 drivers from the previous season, as well as the top 8 from their Pro2 feeder series, were eligible to compete in this round. This meant that qualifying took a considerably less amount of time, and that runs were generally eventful. There were fewer crashes, and almost no runs resulting in a score of 0.

I saw this as a welcome change to the system, despite some of my favorite drivers not making the cut from last season (#whereisdannygeorge anybody?). While it’s a shame some of the fan favorites are gone, this is definitely a step in the right direction in establishing Formula Drift as the top sanctioning body of drifting. I relate this to something like Formula 1, in which drivers have to earn their way to competing there. Not just anyone can walk in. This guarantees fans are only seeing the best of the best, and drivers who deserve to be competing on a global scale.

One thing in particular garnered a lot of attention this weekend, and that was the return of Tanner Foust. Many of you are likely familiar with his work on Top Gear USA, or maybe in Global Rally Cross. However Tanner cut his teeth in the Formula Drift series, winning the championship two years in a row. He’s been absent for five years, but decided to come back for a few rounds this season.

What fascinated me most was the car he is piloting this season. He is driving a Volkswagen Passat that has been swapped with a GM LS7 engine. Though it doesn’t sound like it, as some serious engineering went into the headers. I kept saying it all weekend, but this car sounds weird when you know that the LS7 lurks under the hood. This build raised a lot of eyebrows in the off season, as it’s pretty uncommon to see a manufacturer use other companies power plants. From what I hear, Tanner built this car without Volkswagen’s knowledge and then presented it to them as a complete package. It makes sense from a drivers stand point though, as reliability is key in remaining consistent in the series.

While some complain that it lacks originality, I don’t agree with that at all. A bulk of the field campaigns the 240sx, and in recent years the FRS has been coming in popularity. And while there are quite a few unique builds currently, there hasn’t been a Volkswagen in the sport ever. While it is bending the normal conventions of what many consider to be a drift car, it’s still insanely cool. Plus it seems unreasonable to be upset about another manufacturer getting involved in the sport. The more corporate interest there is at a professional level, the more it has a chance to grow.

Unfortunately Foust had a lackluster weekend, after having crashed his car during practice and being knocked out in the top 32. He admitted during a few interviews that the sport had changed dramatically since his championship years, and that it would take a great deal of adapting to become competitive again. I can’t fault him for that, the cars have nearly double the horsepower since his last stint in the series, things have become much more competitive. However the question is, will Foust be able to get it together in the only other two events he is competing in? If he fails to stay in the top 32, he will no longer be licensed to run the series. It’ll be interesting to see how the remainder of his season unfolds.

Fredric Aasbo set the tone for the rest of the season by winning in Long Beach. He narrowly missed winning the championship in the 2014 season, but it was clear to everyone in attendance that he’s focused and determined to win this season.

One gremlin he faced this weekend was transmission issues near the end of the competition. We have seen these problems from his car before, most notably after the incident in Atlanta two years ago, when Vaughn Gittin Jr. drove over Aasbo’s hood.

Before these issues, Aasbo was able to battle through most of the field with ease, although ultimately found a road block against Ryan Tuerck. The two went head to head twice, and ultimately the battle was decided by Tuerck being unable to overcome differential problems. While Aasbo looked strong, it’s clear the rest of the field is just as determined as he is, and if he is going to redeem himself this year it won’t be an easy fight. If I had to guess, I believe that Aasbo, and Odi Backchis (incidentally the second place finisher at this event) will be going toe to toe all season. But the beauty of Formula Drift is anything can happen on any given weekend.

Ultimately I was impressed with the event this weekend. For those in attendance there was plenty to see in the pits. Plus it’s hard to really describe seeing a Nissan GTR fly by going sideways. I’m looking forward to seeing how this season plays out. With a strong field of drivers, and plenty of interesting builds (something I think we’ll cover in another post very soon), we’re in for quite a bit of action. I’ll be covering each round after it happens, and giving my thoughts on each event, as well as the series as a whole.

If you’re unfamiliar with the series, and are interested in learning about more, check out the Formula Drift website. There you can find more information on the drivers, cars as well as recordings of previous rounds. I’ll be doing more articles in the future on these events as well as a break down of some of the series highlights (such as what goes into building one of these drift monsters).