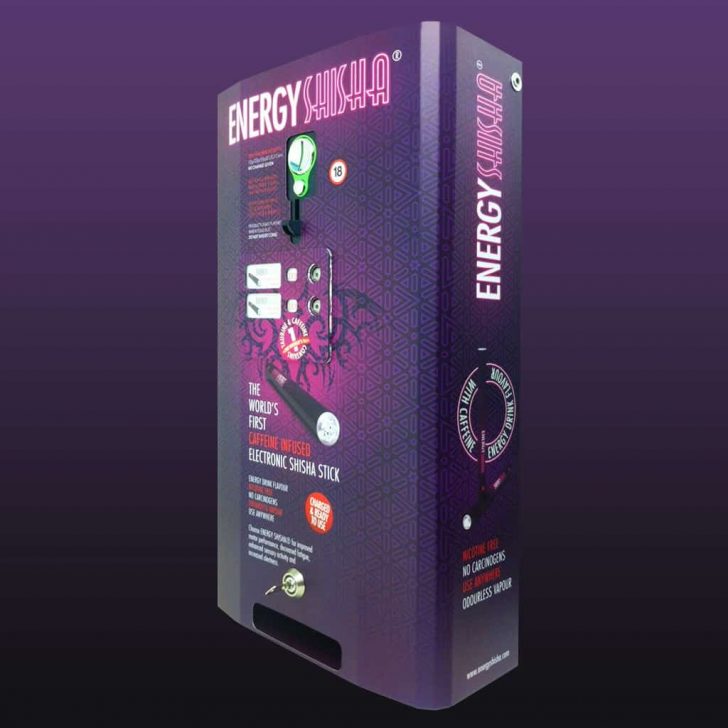 When you hear the term “Shisha”, the first image that comes to mind is the traditional hookah, the multi-stemmed smoking instrument used in the Middle Eastern countries for vaporizing and smoking flavored tobacco through a water basin. But times are changing and even smokers are starting to look after their health by switching to electronic cigarettes. But what about us coffee and energy drinkers? Shouldn’t we reduce those calories but still get our caffeine fix? With the Energy Shisha, you can. The energy shisha is an innovative and ingenious design for those caffeine lovers who are always on the run.

The device is a clean, no-spill, no refill solution for caffeine cravings. This e-cigarette contains no tobacco or nicotine and is made up of propylene glycol, glycerol, flavoring, 0.3% caffeine, and taurine. The Taurine is for improved motor performance, decreased fatique, enhanced sensory activity, and increased alertness. When the caffeine/taurine infused vapor is inhaled, the diamond-cut light on the tip of the stick lights up creating a cool looking effect. And when the water vapor is exhaled, it looks just like smoke but without the nasty harshness or gross cigarette/cigar smell. One thing I really like about the Energy Shisha is that it doesn’t contain the calories which I would be ingesting if I was drinking an energy drink or some sort of latte.

The packaging for this is simple and attractive while the actual device is quite small. The smoking device also features an LED light at the tip of the shisha which lights up every time you inhale. Might have been cool if the light was red or orange so that it resembles a real cigarette when inhaling  but no big deal. According to the company, Energy Shisha can last up to 300 puffs which can equate to the effects of drinking 15 regular cans of energy drinks. So 20 puffs will be the same as drinking a can minus the calories. The only downside, you don’t feel you quenched your thirst. And the caffeine content of 0.3% is a lot less than that of an energy drink but the delivery system of caffeine vapor is more efficient. When the caffeine is inhaled through the lungs, its effect is sent directly to the brain, while the energy drinks would have to take the longer path through the digestive system including the liver. Hmmm, maybe an alcohol infused shisha should be their next product?

Energy Shisha Sticks are stylish, portable, and quite enjoyable. Because of its odorless vapor, it can be used anywhere. The effects are of the energy shisha are quite fast and they tend to last for 25 to 35 minutes. The manufacturer recommends not taking more than five, three-second puffs at a time and no more than 20 puffs in an hour. This product should also be used by those who are 18 years of age or older.

Overall, a very cool product and definitely something to look into. And if you happen to make a purchase, Energy Shisha’s blog will also enter your name into a draw for a chance to win an iPad which they give away every month.