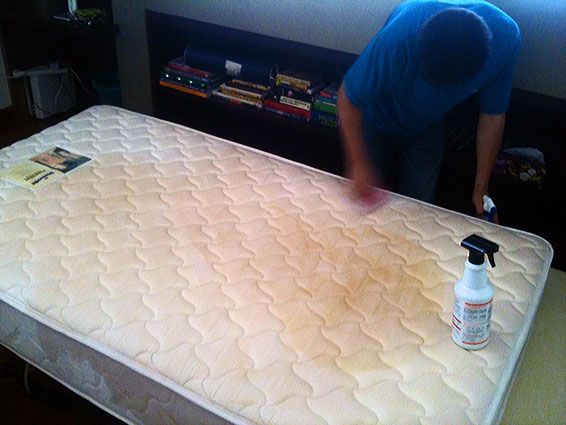 Detective Dripwell – The Mystery of the Mattress Stain

There are many masks that we wear in our daily lives. Masks for home, one for work, another amongst friends, and they are made of many parts. Our tattoo’s and fashion. They way we hold our shoulders or saunter down the street. Even the little dog your girlfriend carriers in her purse.

Of course, the real problem with wearing a mask is when it is stripped away. When your parents make you feel as if you’re still a child, when your boss makes you feel incompetent, and most disturbingly when you wash the sheets on your partners bed.

Ah yes, the mattress – a sort of canvas in which we all (unfortunately) do some painting. If there is a more true depiction of a man and his habits, I don’t want to know about it because it’s probably super gross. Let us then explore these personal Picasso’s and find out what we can. Whether you’ve got a large bed, a small one… a bed around this size, or that… I think you’re going to find a common thread here.

Much like the ink stains you might find in a therapist, the Rorschach presents as much mystery as it does answer. An indistinct blob, composed with the colors of rust and ocher, the Rorschach peers into those deep recesses of the human soul, revealing a more primitive mind and a fear of the darkness within.

Perhaps some dark and terrible art has been performed here. A witch craft, once thought lost to the ages. There is also the possibility that the stain itself is alive, a slippery-looking looking being feeding off your dreams at night. Ready to leap from the fabric and slither away, taking refuge in your damp, dark basement. Or perhaps you sweat a lot. It could be any of those things.

The mark of that most terrible habit, eating in bed. The gravy train is rumored to follow about the males of the human species. A sedentary creature, sat slurping and chomping upon any food stuff foolish enough to be at the front of the refrigerator. Possibly initiated by a drunken romp with the lads, some more severe bed-eaters have been known to fall asleep with uneaten food in their hands. Sleeping ever so gently, illuminated by the glow of the television, these people then proceed to toss and turn. Waking in what appears to be an original Jackson Pollock, the bed-eater is left with naught but shame.

While I might still suggest a mattress cover, what a bed-eater really needs is some self control and self respect.

That mark that we all wish wasn’t there, the Red Devil paints a brutal portrait. Perhaps you would like to believe that it is the result of a poorly bandaged wound. A sports injury that you didn’t dress well enough. We all know the truth of the matter though. This was the scene of a brutal murder, the like of which only the great Sherlock Holmes might unravel!

Okay, fine! I’ll stop being so mellow-dramatic. You know what caused this. We can get through it though. Simply approach the beast with an offering of flowers, chocolate covered strawberry’s, a heating pad, and a DVD of The Notebook.

This one has less to do with an unpredictable bladder, and is about those who toss and turn. Like a slug, slowly climbing the wall by your garden, so too does the restless sleeper leave his own passing trail. If one stares deeply into the hues of yellow-gold, your future might be revealed to you as to tea leaf readers. The various lines and formations, stitching together a latticework of possible futures.

Now all of this unnecessary imagery could simply be taken care of with a mattress pad or cover. They’re cheap enough, and given the amount of money you’ve spent on a good bed it’s worth protecting. But if it’s already there, well… it’s not too difficult to clean either.

(Photos by Unknown and Elliott Brown)