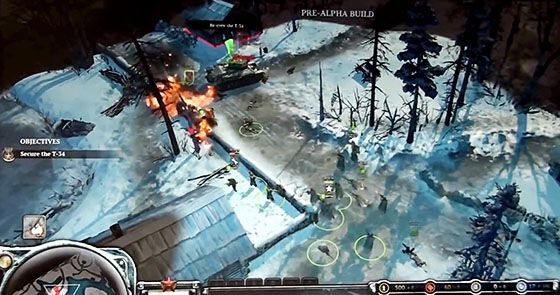 Back in May of this year we showed you guys some of the first screenshots from Company of Heroes 2, Relic’s latest addition to the wildly successful Company of Heroes franchise. It’s been a long time coming too, with the first game having come out way back in September of 2006. I mean, that was practically right after the war ended!

So what we’ve got for you today is a few videos worth of “leaked” footage from some sort of event showing off Company of Heroes 2 in a pre-alpha state. Let me say that once more… what you’re about to watch is pre-alpha gameplay footage. Though it looks extremely awesome to my eyes, perhaps you’ll see some bugs and glitchiness that I missed. If that happens, take a deep breath and remember that COH2 isn’t coming out for quite some time. Until then, sit back and enjoy the awesome footage, and the terrible ambient noise.

As you probably noticed, the visuals have been given a massive overhaul since the last game. Not surprising in the least, but it’s nice to finally see it in action. Screenshots alone simply don’t do it justice.

In addition to the fantastic new graphics, there have been a number of gameplay changes as well. Snow and inclement weather has a profound effect on the health of your troops, and the maneuverability of your vehicles. If soldiers are exposed to deep snow for too long, they simply die. If tanks are driving across ice, they’ll sometimes slip around. There’s even a much improved line of sight system, which means that you as the player won’t be able to magically see enemies through buildings before exposing that area. These may seem minor, but I have a feeling the changes are going to have a substantial impact on how the game plays, especially the changes to LOS.

Though the official release date is currently unknown, word on the street is that we’ll see a retail release sometime in early 2013 – probably around March. Given that this is pre-alpha footage, I’m a bit skeptical of that, but if they can pull it off and have the game be reasonably bug free, then I’m all for it. It’s been way too long since I’ve played a good RTS game.

In the mean time, you can actually pre-order a copy online for $59.99. You even get some lame pre-order bonuses, like extra vehicles, but why not, right?