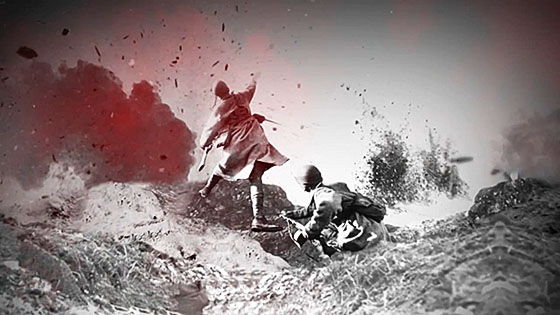 Relic recently released this debut trailer for Company of Heroes 2, the much anticipated sequel to their previous smash hit of a similar name. It was gritty, it was visceral, and like most WW2 inspired games of yesteryear, COH took place on the ever popular western front. But Relic is making big changes this time around, with better graphics, and a brand new territory: the Eastern Front.

The trailer you’re about to watch gives us a bit of an introduction to the events of the Second World War, and explains why Relic decided to focus on the Eastern Front this time around. They do this using what I can only describe as a sort of animated collage of stock photography and football announcer-esque voice-overs. You’ll see what I mean.

Though I’m pumped to see new COH2 material getting released, I can’t help but wonder why Relic would bother releasing such a generic and uninspired trailer. Sure, there are probably some gamers who hadn’t heard of the Eastern Front, but couldn’t they have shown it off using say, in-game footage? You know, to actually show off their game, using their fancy new graphics engine which they’ve shown off via screenshots anyway? Seems a bit silly to me, but honestly, the PR departments’ of game studios have done stranger things.

There’s currently no known release date for Company of Heroes 2, but I’ll be sure to post screenshots and footage as they become available. I can only hope that Relic wises up and begins to show us more than public domain WW2 photographs the next time they decide to “show off” their new game.