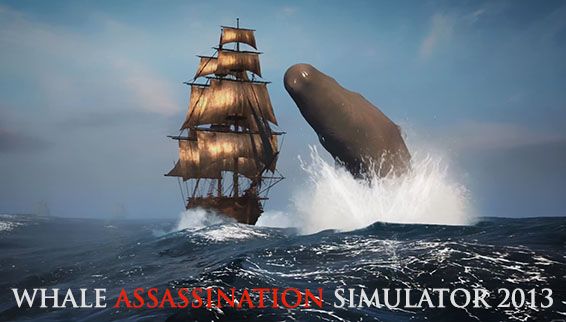 It’s that time of year again where, just like every other year, Ubisoft begins their long media filled journey towards the release of their next game. This time, they’re doing something very special: Assassin’s Creed 4: Whale Murder Pirates of the Salty Sea.

What you’re about to experience is the next generation of the Assassin’s Creed franchise, featuring a slew of new, never before seen gameplay features and technologies such as:

And better yet, you don’t even have to imagine these things, you can see them in action here, in this very gameplay trailer, featuring none other than the legendary pirate Jim Grim McQuin, and the trusty band of assassins and aliens we’ve come to expect from the franchise. As a wise man once said, knowledge… is power.

They keep mentioning something about a Black Flag, or snake… or weasel, but I don’t know what that’s all about. I suppose choosing the color of one’s flag and or weasel is an important aspect of any legitimate pirate enterprise. That’s why I’ve come up with my own… I’m going with the color blue. Black is so… drab.

Well, there you have it folks. Finally, Ubisoft is taking the franchise in a whole new direction without any of the tired gameplay elements we’ve been subjected to all these years. You know, crop rotations and letting all the minerals back in and all that. I’m glad to see they’ve slowed down the rate they put these games out to focus on quality.

What are you most looking forward to in the next Assassin’s Creed game? Personally, I can’t wait to try out the mermaid wrestling mini-game. They showed a little bit of it around 1:32 seconds into the trailer. Fun stuff!