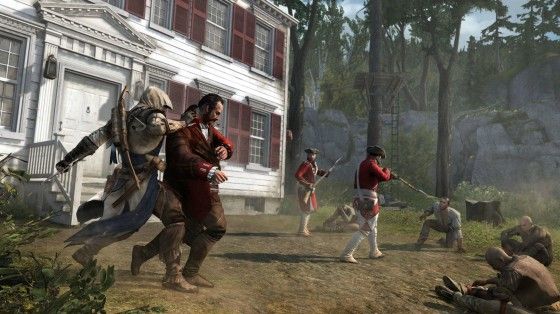 People often go out of their way to see beautiful scenery. We sit at the beach to watch sunsets, or climb to the top of mountains to gaze down at the landscape below. People even do this in video games, capturing screenshots of stunning digital landscapes in games like Skyrim, and soon perhaps even Assassin’s Creed 3 – a game that seems to have beautiful landscapes in spades.

These latest screenshots look phenomenal, and lead me to believe that the world is every bit as varied as Creative Director Alex Hutchinson keeps promising us. Both the cityscapes and the natural outdoor landscapes look excellent. Not exactly in a photo-realistic way, but instead with a certain stylization and an ample amount of life, tone, and character to make the various locations look like a living, breathing, world.

The Nature of Things 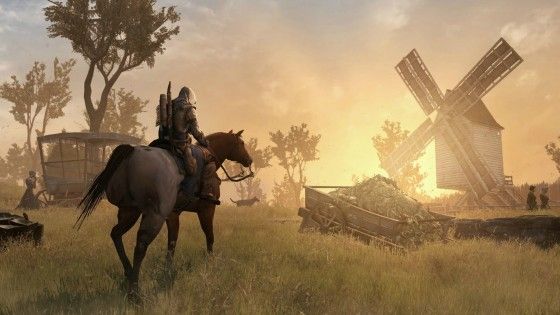 I keep telling Connor to quit horsing around, but he simply never listens! I bet he’s going to jump into that hay bale any moment now. Master of the trees, and now master of the seas as well it seems. How did Connor manage to become captain of a ship so quickly? Only another month until we get the answer to that question. Oh, what it must have been like before the advent of email. Actually having to send pieces of paper around, and by horseback at this point in time. Such a hassle! If I had to level one critique about this shot, it would be that the fellow being stabbed in the neck seems pretty okay with it. Given the horrendous pain a sharp object to the neck would undoubtedly cause, well… I’m surprised he has such a blank expression. I have a feeling I’m going to get pretty hooked on using this crazy weapon. Darting around from tree to tree… pretending to be Scorpion from Mortal Kombat. I’m fairly certain this isn’t a real time rendered in-game shot, but it looks so awesome that I decided to include it anyway. Maybe a few generations from now console games will actually look this good. When you think about it for a moment, and I mean really think about it… getting hit with a cannon ball would probably hurt big time… like a crazy amount of pain. Lots of dapper lads, milling about, minding their own business until Connor comes to town and decides to start climbing buildings and awkwardly bumping into people. Can you spot Connor in this scene? It’s like Where’s Waldo? Here he is again, creeping about passersby in the middle of the night. I’ve tried jumping out of bushes at people before too, and strangely enough, it never went over very well. If we hang around long enough, perhaps we can pull all of these soldiers over the edge of the cliff. I’m sure at least one of these guys would appreciate the help. Look at all the animals! I’m hoping that we can have pets in this game like dogs or cats, or at the very least monkeys. What assassin in their right mind wouldn’t want a helper monkey? I’ve started to realize that a games good looks and charm don’t just come from raw graphical awesomeness. No, I believe they largely come from character, and the developers’ ability to instill the world with depth and variety. It’s the little things that count, and that’s one of the reasons I find games like Deus Ex, Thief, Bioshock, and the upcoming Dishonored so compelling. All of these games feel like living worlds. They certainly don’t have the best graphics, but somehow they’re able to transcend graphics alone to creative a beautiful world.